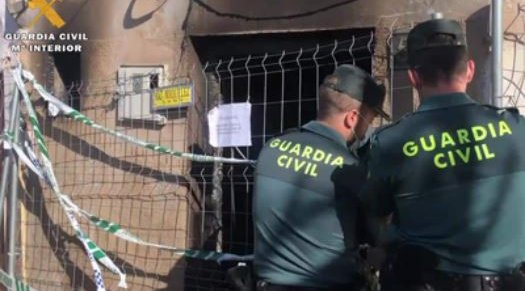 Heavily pregnant woman rescued from a blaze in Almeria’s Roquetas de Mar.
Officers from the Guardia Civil in Almeria rescued a nine-month pregnant woman from a blaze.
The woman was suffering from smoke inhalation and was evacuated after a house fire in the Plaza de Andalucia in Roquetas de Mar.
At around 7am on February 9, officers from the Guardia Civil were alerted to a fire that was blazing in the Plaza de Andalucia. The officers quickly mobilised and headed to the scene of the fire.
When the officers arrived at the building they discovered a large amount of smoke. They headed inside and discovered the fire had started in a first-floor flat. The officers started to evacuate all the residents. The officers had to head outside due to the amount of smoke that had accumulated.
A neighbour then told the officers that a nine-month pregnant woman was living on the first floor.
The officers rushed back into the building and eventually managed to get the woman to safety. She was pale and dazed and on the point of fainting. The officers had repeatedly knocked until the woman made it to the door. The area was completely filled with smoke and it was barely possible to breathe. The officers were able to evacuate her to safety.
Firefighters from the Poniente Fire Brigade and an ambulance arrived on the scene. Medics were able to assist the woman and the firefighters swung into action.
The woman was taken to the Poniente Hospital. The firefighters had the blaze under control at 8am.