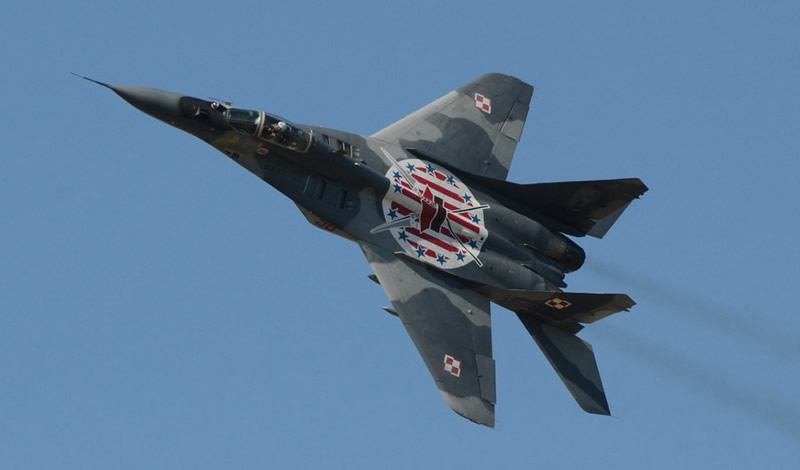 Poland offers its MIG-29 fighter jets to the US to pass to Ukrainian pilots. image: flickr - Lens Envy

Poland has offered to give its fleet of MIG-29 fighter jets to the US, who would then pass them on to Ukraine

In what the US described as a ‘surprise move’, Poland’s Ministry of Foreign Affairs announced late on Monday, March 8, that it is now ready to deploy its MIG-29 fighter jets to the US, to assist Ukraine in its conflict with Russia.

For almost one week, the governments of both countries have been negotiating how to formulate such a deal, without incensing Vladimir Putin, and provoking an escalation in the crisis in Eastern Europe.

Polish officials, and the country’s president, Andrzej Duda, are reportedly prepared to place their Air Force’s full consignment of MIG-29 fighter jets ‘at the disposal of the Government of the United States of America’.

The aircraft would be delivered to the Ramstein US Air Force base in Germany. From there, the US would have the task of getting them to the Ukrainian Air Force.

“At the same time, Poland requests the United States to provide us with used aircraft with corresponding operational capabilities. Poland is ready to immediately establish the conditions of purchase of the planes”, said a Polish official.

Addressing the Senate Foreign Relations Committee, on Tuesday, Victoria Nuland, the undersecretary of State for political affairs, said, “I saw that announcement by the government of Poland as I was literally driving here today. To my knowledge, it wasn’t pre-consulted with us that they planned to give these planes to us”.

“But, as you know, we have been having consultations with them for a couple of days now about this request from the Ukrainians to receive their aircraft, and were they to donate them, whether we would be able to help support backfill in their own security needs”, she added.

Nuland did seem genuinely taken aback by the Polish announcement, claiming that she was said she was in a meeting when she heard about it, saying, “so I think that actually was a surprise move by the Poles”.

“We’ve seen the Polish government’s announcement… we have nothing to offer at this time”, a Pentagon official told Politico, as reported by metro.co.uk.