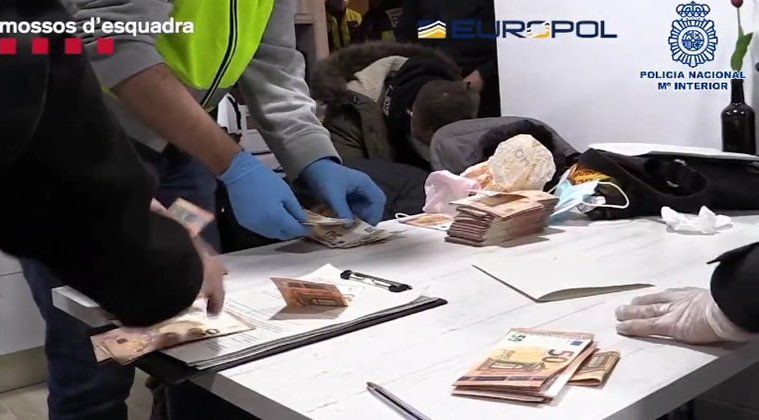 The Mossos d’Esquadra and the National Police, in coordination with Europol, this Friday, March 11, reported that they have dismantled one of the most active criminal groups responsible for the manufacture and introduction of counterfeit banknotes in Spain, to an estimated value of €500,000.

During this operation, a total of ten entries and searches were also made by court order, nine of them in Catalonia, and another in the Malaga municipality of Estepona, resulting in the arrest of 14 individuals.

The detainees – one of whom, the ringleader, has been already been imprisoned – sold the fake €10, €20, and €50 notes through the Dark web, and then sent them to their recipients using parcel delivery companies.

Of the fourteen arrested, seven were detained in Tarragona, five in Barcelona, ​​one in Lerida, and another in Estepona. They have all been charged with the crimes of currency counterfeiting, drug trafficking, fraud, electricity fraud, and belonging to a criminal group.

This joint investigation was launched in the middle of November 2021, after the police detected the circulation of a large number of fraudulent €20 and €50 banknotes, all displaying common counterfeit elements.

In addition to sending the counterfeit notes to their recipients by courier, the scammers, located in Barcelona, ​​also introduced the counterfeit money into the formal economic circuit, via purchases made through a well-known product trading platform, using people from outside the criminal group, offering them fraudulent job offers.

In order to infiltrate the group, investigators posed as online purchasers of the counterfeit notes. It was subsequently discovered that a woman and her son were in charge of acquiring the holograms and adding them to the banknote prints made with modified printers.

Investigations quickly made it possible to locate the three laboratories used for manufacturing the counterfeit banknotes, located in the Tarragona towns of Salou, Reus, and the city of Tarragona itself.

Given the great demand that the gang had for its product, its leaders instructed other people they trusted to also manufacture counterfeit bills. One of these was a female resident of Estepona, who was arrested in the Costa del Sol town.

In the police raids, they seized €25,000 worth of €50 notes, €6,000 worth of €10-euro notes, two high-resolution printers, a scanner and paper for making the counterfeited notes, and a holographic band.

Two detonating weapons, a crossbow, computer equipment, several mobile devices, 240 marijuana plants, 1,200 kilos of buds, and eight and a half plates of hashish ready for sale, were also confiscated, as reported by malagahoy.es.