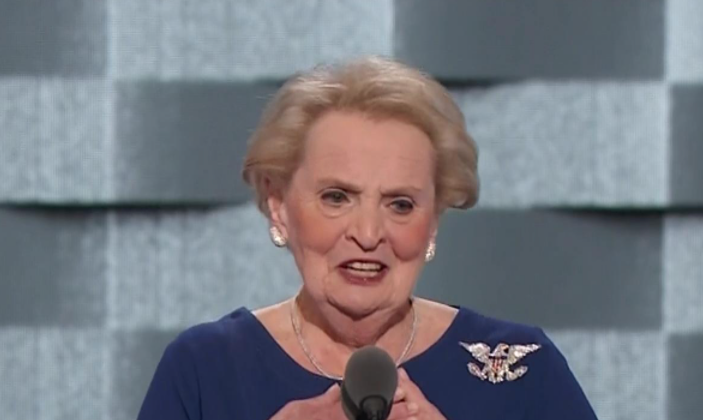 AMERICA’S first female Secretary of State Madeleine Albright dies at the age of 84, according to her family on Wednesday, March 23.

The family of Ms Albright announced that she had passed away after a battle with cancer ‘surrounded by her loved ones.’

A statement read: “We are heartbroken to announce that Dr Madeleine K. Albright, the 64th US secretary of state the first woman to hold that position, passed away earlier today. The cause was cancer. She was surrounded by family and friends. We have lost a loving mother, grandmother, sister, aunt, and friend.”

The former US Secretary of State was born Marie Jana Korbelova and was a native of Prague.

She came to the United States as a refugee in 1948 and rose to the heights of American policy-making, receiving the Presidential Medal of Freedom, the nation’s highest civilian honour – an honour she received from President Barack Obama in 2012.

Albright was a celebrated diplomat and the first female to serve as America’s secretary of state after being nominated by President Bill Clinton in 1996, as reported by the BBC.

She was a “tireless champion of democracy and human rights” who spent four years (from 1997 to 2001) as US Secretary of State and promoted an end to war in the Balkans as well as an expansion of NATO.

At the time of her death, she was a “professor at Georgetown University’s School of Foreign Service, chair of Albright Stonebridge Group, part of Dentons Global Advisors, chair of Albright Capital Management, president of the Harry S Truman scholarship foundation, chair of the National Democratic Institute, chair of the US defence policy board, and an author,” the statement said.

“She founded the Albright Institution of Global Affairs at Wellesley College, served as a lifestyle trustee of The Aspen Institute and was a member of the chapter of the Washington National Cathedral.”

In a State Department briefing on March 23, spokesperson Ned Price said President Joe Biden and Secretary of State Antony Blinken have been notified of her death, as reported by ABC News.

“The impact that Secretary Albright … had on this building is felt every single day in just about every single corridor,” Price said.

Below is a statement from the family of @Madeleine: pic.twitter.com/C7Xt0EN5c9