Transport strikes to continue after no agreement reached with transport workers 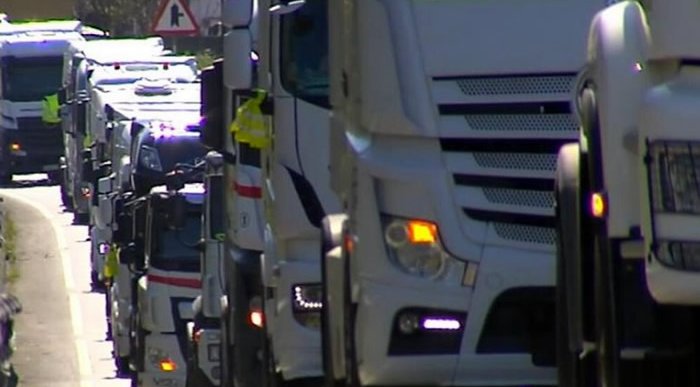 With no agreement reached between the Government and the transport workers, the strikes are to continue

Spanish Government ministers failed to achieve either of their objectives in the meeting this Thursday, March 24, with the National Road Transport Committee (CNTC). No agreement was reached with the transport workers, and so the strikes will continue to affect the country’s supply chain.

The Platform for the Defense of the Transport Sector of Goods by National Road and International, called the original strike last Monday 14. It has requested a meeting with ministers, but this has so far not been granted.

Friday 25 will see the twelfth consecutive day of national strike action, including a demonstration in Madrid by members of the taxi, ambulance, and bus drivers sector.

In an interview with RTVE channel 24 Horas, the Minister of Economic Affairs, Nadia Calviño, told them, “I hope that an agreement is reached, there is a will”. Visibly tired after a very long day of discussions, she assured that the will of the Government was ‘clear’ and that it was confident of ‘finding an adequate response to the difficult situation’.

After twelve hours of meetings, however, that solution has not yet arrived. Negotiations began at 11:30am. Calviño attended, accompanied by the ministers of Treasury and Transport, Maria Jesus Montero, and Raquel Sanchez, respectively.

The Executive still refuses to recognise the callers of the original strike as valid interlocutors. The argument is that their representation in the CETM was due for renewal in December and they did not make it.

“We are speaking with the suitable interlocutors”, assured Calviño. Of course, the minister followed the line set by the Government in recent days under which they qualified them as being a “far-right” group. “I am not aware that the Government said something like that”, defended Ms Calviño, a week after the Minister of Transport, Raquel Sanchez, said that the organisers of the protests were.

Negotiations by the Ministry of Transport dealt with the amount of money per litre of diesel to be discounted, and for how long. The Government has offered between 15 and 30 cents per litre, an aid that would be deducted at the time of purchase.

For this, the Government proposes to make around €500 million available. This is an amount that Sanchez agreed with the CNTC last Monday 21 in another meeting with the sector.

That amount was not accepted by all parties this Thursday, as there were voices requesting to increase the public spending to €1,000 million, so that the aid could be extended for longer. For the offer to be effective, the Government is also open to limiting the price of fuel.

According to ministry sources, carriers are currently returned around 50 cents per thousand litres every three months. However, it was agreed with the CNTC to reduce that period to one month. Likewise, the variation index of the price of professional diesel will be published, which will give the sector “greater certainty when it comes to forecasting prices”, as reported by 20minutos.es.