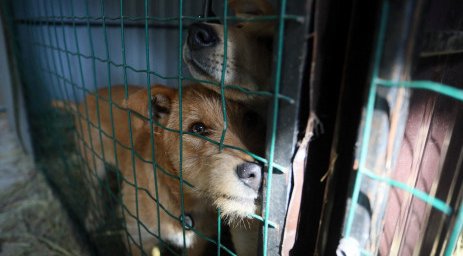 The war in Ukraine as not only affected those that live there but also their pets, but now those that have been abandoned join the war exodus as the international community comes to the rescue.

According to the United Nations nearly ten percent of the country’s population have fled with more than 3.7 million refugees having made their way across the borders. Many of these have fled with what they can carry and that includes a vast array of pets, everything from dogs to birds to turtles.

According to a report by Al Jazeera, the “Home for Rescued Animals” in the city of Lviv, is sheltering many of those abandoned pets. There are dogs desperate for passers-by to walk them, owls looking for that next meal, cats who want to cosy up to their owners – it’s a desperate situation.

“This war has made us more engaged,” he says with his hilltop sanctuary once a “haven” reserved for exotic animals now a shelter for abandoned pets.

According to AFP news agency, more than two million have crossed the border with Poland, including droves of animal lovers ferrying dogs, cats, parrots and turtles to safety.

Lviv is just 70km from the border and is the final stopover on Ukrainian soil before refugees cross the border with Poland. Some weary and uncertain of their future choose to leave their pets behind.

Zalypskyy estimates his shelter has taken in 1,500 animals since the war began, from migrants and shelters in “hot spots” to the east.

He adds: “There’s been no system, we just have many volunteers who head out and fetch them.”

Many of the animals are stressed both by the war but also being separated from their owners, Zalypskyy saying as a result: “We are all bitten and scratched, the animals are very stressed.”

He continues saying that most of the animals do not stay long with an army of volunteers either adopting the animals locally or taking them onwards to Germany, Latvia and Lithuania.

Such has been the help that he has no cats available for adoption, with all those in his care headed to Poland.

That army of volunteers are also helping by exercising the dogs, with no shortage of volunteers looking to take them for a stroll.

She and her husband Ihor, 36, and four-year-old daughter Solomiia, Chernikova fled Kyiv a week before the war broke out along with their two guinea pigs Apelsynka and Lymonadka (Orange and Lemonade). They are now living in the relative safety of Lviv.

Chernikova says: “We’re not in the war conditions itself, but it’s psychologically very hard.

“When you have a walk with a dog, it just feels as if you’re living a normal life.”

War often brings people together with those affected in Ukraine doing so to help those pets abandoned  to join the war exodus.