Temperatures in Spain for May June July set to break records 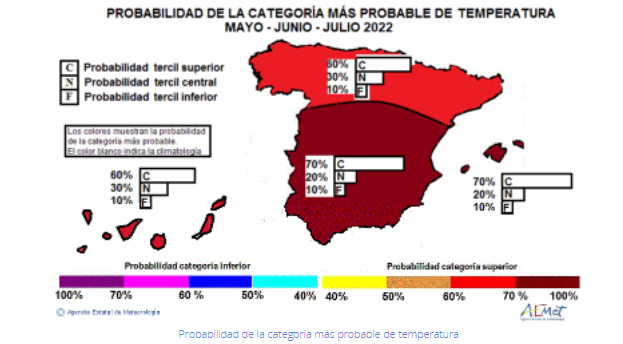 AEMET predicts May June July to see amongst the highest temperatures recorded in Spain over a  30 year period.

Taking to Twitter on Monday, 2, May, Spain’s State Meteorological Agency AEMET predicted that the next three months may see some of the hottest temperatures recorded in Spain over a 30 year period ranging from 1981-2010:

“#AEMET prediction
TEMPERATURE 🌡️
For MAY-JUNE-JULY 2022 there is a high probability that the temperature will be in the upper tercile for the whole of Spain (reference period 1981-2010).”

On their website AEMET explained how their system works:

“On a seasonal scale the prediction is probabilistic in nature. The predictions reflect the probability that the average value of a variable (normally accumulated precipitation or surface temperature) over the three-month period will be above or below the values considered normal or usual. These normal values are defined from the historical records of each point over a reference period (in our case 1981-2010). In order to characterise the values of a specific point and station, the total of records is divided into three groups: one of them will contain the lowest third of values (lower tercile), another third of them will contain the highest values (upper tercile), and the remaining values, intermediate between both, will be those considered normal values (central tercile). For each point, there will be two values that will mark the boundary between the lower and the normal, and between the normal and the upper tercile”

“The fact that an area is marked with the colour corresponding to a category does not mean that there is certainty that the observed temperature will be in that category, but that it is more likely to be in that category. As a consequence, the average temperature finally recorded has a non-negligible probability (indicated for each area by bars) of being in a different category than the one indicated on the map as “most likely”. This probabilistic nature of the seasonal forecast needs to be taken into account when interpreting the forecast and making decisions. It is also important to note that the absolute values of surface air temperature that correspond to the definitions “above normal”, “normal” or “below normal” depend on the climatology (historical information) of each location.”