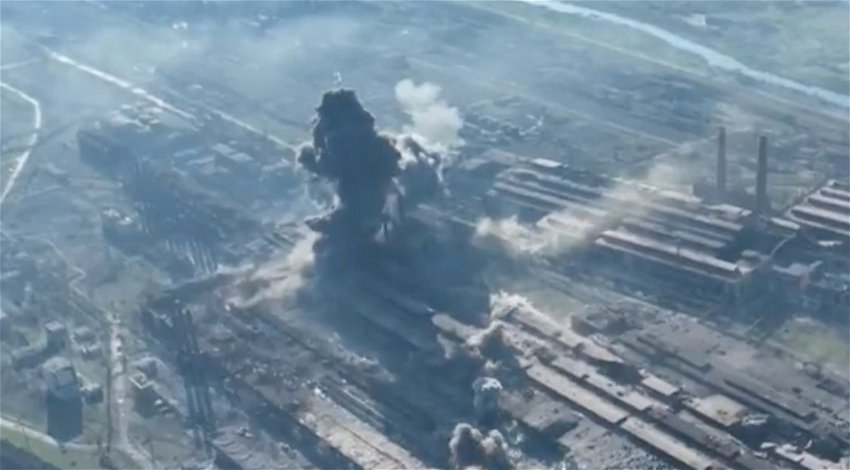 Image of the Azovstal steel plant in Mariupol. Credit: DNR/Russia

101 civilians had previously been evacuated from the facility before Russian troops stormed it.

HEAVY fighting has been reported inside the Azovstal plant in Mariupol, and despite 101 civilians being evacuated prior to Russian forces storming the facility, more than 30 children are alleged to still be trapped in shelters underneath the steel plant.

The mayor of Mariupol, Vadym Boichenko, reported that heavy fighting had been heard inside the Azovstal plant on Wednesday, May 4, 24 hours after Russian troops had forced their way into the steel plant.

Video from a DNR account showing Russian/DNR strikes on the Azovstal plant in Mariupol. Possibly by TOS-1A thermobaric MLRS. Not sure of the date. https://t.co/ZtGmAMDnx0 pic.twitter.com/c5Zy94WpBA

“Russian soldiers are trying to suppress the desperate resistance of the defenders of Mariupol. Civilians still remain in bomb shelters under the plant,” he said via a United News telethon on Wednesday, May 4.

He also revealed that more civilians including children were still in the Mariupol facility.

“Today there are hundreds of locals. They came to this fortress two months ago, hid there and are waiting to be rescued. There are also children. There are more than 30 children waiting for a new negotiation procedure to evacuate civilians,” he said.

Communication with the defenders of Azovstal has been lost just a moment ago, the Mayor of Mariupol says. #SaveMariupol #WarCrimesOfUkraine #WARINUKRAINE pic.twitter.com/KKY7qDwXTN

On May 3, the UN revealed that 101 civilians trapped in the Azovstal plant were evacuated before Russian forces stormed the facility in Mariupol.

A statement from the UN Office for the Coordination of Humanitarian Affairs said: “I am pleased and relieved to confirm that 101 civilians have successfully been evacuated from the Azovstal steel plant in Mariupol and other areas in a safe passage operation coordinated by the United Nations (UN) and the International Committee of the Red Cross (ICRC).

“The operation started on Friday 29 April and was agreed with the parties to the conflict, following engagements by the UN SecretaryGeneral António Guterres during his recent visits to Moscow and Kyiv,” it continued.

“Thanks to the operation, 101 women, men, children, and older persons could finally leave the bunkers below the Azovstal steelworks and see the daylight after two months.”