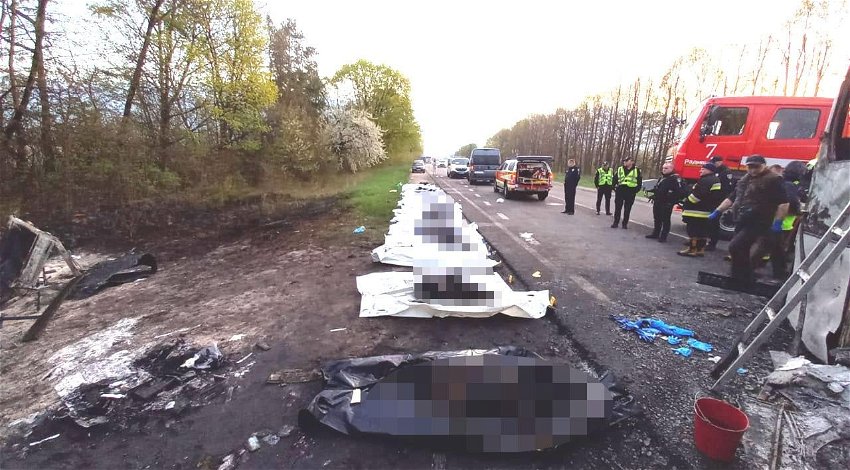 Police are investigating the incident which occurred on Tuesday, May 3.

UKRAINIAN President Volodymyr Zelensky has offered his condolences to the families who lost loved ones in a ‘terrible road accident‘ that killed multiple people in the country’s Rivne region on Tuesday, May 3.

26 people died after a bus burst into flames following a collision with a petrol lorry in Rivne Oblast, according to local police.

Early reports suggest that at the time of the accident, there were 34 passengers and one driver in the cabin of the Setra bus bound for Poland.

During his nightly address, Mr Zelensky offered the loved ones of the victims ‘all necessary assistance’ and his ‘sincere condolences’.

He said on May 3: “Today we also have another tragic news. A terrible road accident took place in the Rivne region. A bus, a car and a fuel truck collided. As of this time, 17 people died. But there may be more casualties.”

He added: “My sincere condolences to all those who lost their loved ones. I commissioned to provide all the necessary assistance to the victims.”

Further details of the crash have been released by police following the incident.

According to the police, the driver of the Mercedes-Benz Vito car that caused the accident was manoeuvring to overtake another vehicle, drove into the oncoming lane, where he collided with the petrol lorry.

All passengers were believed to be between the ages of 17 and 69, with the youngest about to turn 18 on May 12, the police reported.