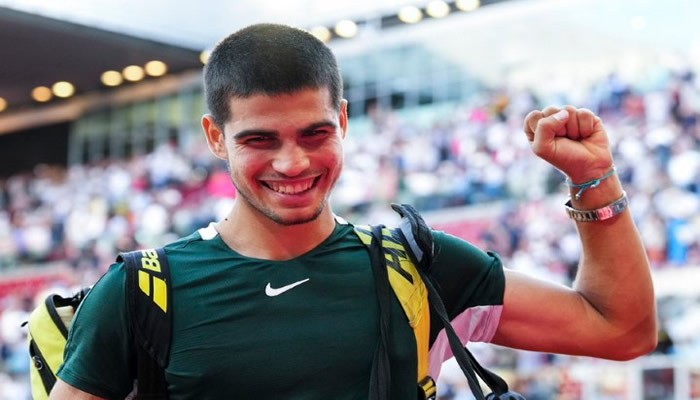 Spain’s newest tennis star, 19-year old Carlos Alcaraz has this afternoon, Saturday, May 8, beaten world No1 Novak Djokovic, in the semi-final of the Mutua Madrid Masters 1000. A thrilling encounter at the Caja Magica tennis centre saw him grasp a 6-7 (5-7) 7-5 7-6 (7-5) victory, to book his place in the final.

Today’s win placed Alcaraz in the tennis history books, as the young man from Murcia becomes the youngest ever finalist in this prestigious ATP event in the Spanish capital. His semi-final win over compatriot Rafael Nadal also made the 19-year-old the only teenager to ever defeat the winner of 21 Grand Slam titles on clay.

Alcaraz had to pull out all the stops today against the legendary Serbian tennis star. He started in style, breaking Djokovic immediately in the first set. The world No1 has too much experience to roll over though, and soon levelled at 4-4. He eventually claimed the marathon first set of one hour and two minutes after a tie break.

The second set was evenly matched until Alcaraz managed to break the serve and subsequently level the match. This was the first set dropped by Djokovic in the whole tournament.

With a legion of Spanish tennis fans roaring him on, Alcaraz saw the Serb deliver a stunning ace with the plat at match point. It took another tie break to separate these two players, but after three hours and 35 minutes, it was the Spaniard going into tomorrow’s final.

Another couple of records were set, with Alcaraz becoming the youngest player in 17 years to defeat a current world No1. He is also the first player to beat Djokovic and Nadal in consecutive matches.

Now he must wait to find out if he will play Stefano Tsitsipas or Alexander Zverev in the final this Sunday 9, in Madrid. On current form, neither man will relish facing the young Spaniard.