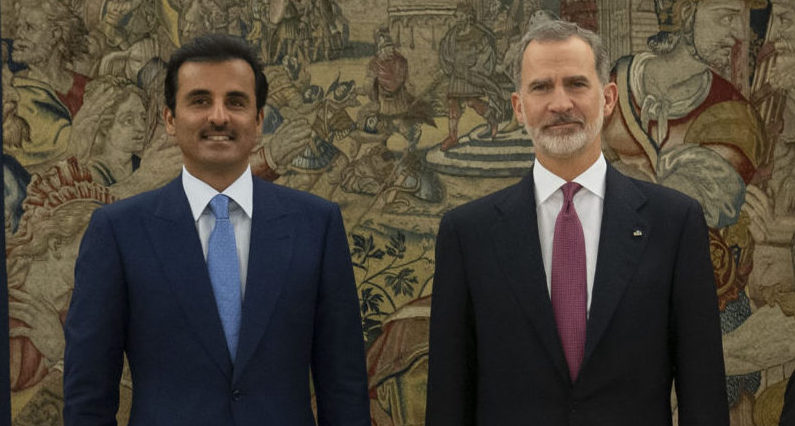 On the evening of Tuesday, May, 17, the Emir of Qatar, Tamim bin Hamad Al Thani, reaffirmed this his country’s confidence “in the solidity of the Spanish economy” and announced that Qatari investments in Spain will increase by €4,720 million.

The Emir of Qatar made this announcement during the gala dinner hosted by Felipe VI at the Royal Palace, at the end of the first day of his visit to Spain.

Previously, his host had thanked him for the Persian Gulf emirate’s confidence in the Spanish economy and its “determined will to continue to be one of the first [foreign] investors in Spain”, as reported by ElPais.

The emirate’s deputy foreign minister, Lolwah Rashid Al Jater, had already told a group of Spanish journalists in Doha, the capital of the country, last week that there would be a “big announcement” on the occasion of the emir’s visit, without further details, while the manager of the Qatari investment promotion office abroad added that it would be related to “renewable energy and sustainability”.

The Emir of Qatar arrived in Spain accompanied by his country’s deputy prime minister and foreign minister, as well as the ministers of finance, energy affairs and trade and industry, the head of the Diwan (the royal household) and the head of the QIA, the Qatari sovereign wealth fund, with estimated resources of €425 billion.

Qatar is already a major investor in Spain, with an accumulated stock of more than €6 billion and a presence in important companies, such as Iberdrola, of which it is the main shareholder and with whose chairman, Ignacio Sánchez Galán, the emir plans to meet during his stay in Spain.

It is also the world’s second largest gas exporter, after the United States, which makes it a key country for Europe at a time when the latter is trying to cut its dependence on Russian gas.

However, the Qatari authorities have already warned that its supply contracts, including those with Spain (where gas from the emirate accounted for 11.4 per cent of the total in 2021), are long-term, so no major increases are to be expected, despite its plans to increase production capacity.

The dinner at the Royal Palace was attended by the Prime Minister, Pedro Sánchez, with whom the emir plans to sign an agreement this Wednesday that elevates bilateral relations between the two countries to the category of strategic partnership.

It will be the most important of a dozen agreements covering numerous subjects, including military cooperation.

“This year we celebrate the 50th anniversary of the establishment of diplomatic relations between our two countries, which have been characterised by continuous development and growing cooperation in all fields, particularly in education, health, investment, energy and the economy,” said the Emir.

“All this is proof of our confidence in the strength of the Spanish economy. Earlier today I gave instructions to increase investments by $5 billion, which will add value to our existing successful investments in Spain, bearing in mind that Qatar is considered one of the largest Arab investors in Spain,” he said.