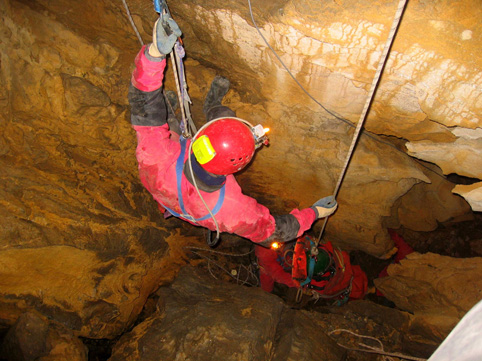 After thorough preparation, a rescue operation is underway to get a woman out of a cave in Almeria, Andalucia, after she fell and sustained injuries while practising speleology.

Emergency services have activated a rescue operation to help an injured caver after she fell in a cave in the Almeria municipality of Maria on Saturday, May 21.

The Guardia Civil is carrying out what is known as micro-blasting in order to unblock access to the cave in the municipality of Maria where the speleologist has fallen. The rescue operation is being carried out by a team of multidisciplinary professionals.

As reported by the command headquarters of the Guardia Civil in Almeria, about 20 agents from the Special Rescue Group of Mountain Intervention (GREIM) are currently working at the site, along with a bomb disposal team (TEDAX) and Public Safety officers, to try to rescue the injured woman in the area known as Los Alamicos.

Firefighters, Cave Rescue teams and doctors are also collaborating in the operation, with logistical support from the Town Hall of María.

Sources from the Guardia Civil have also specified that the woman is “stable and on medication”, while the operation is being carried out.

According to 112 de Andalucía, the accident occurred at around 12:00pm, when emergency services received a call for help for a woman who had been caving and had suffered a fall that had resulted in a blow to her head and one of her wrists in the cave of La Gitana, in the Sierra de María Natural Park.

The GREIM has already been into the cave twice to assess the safest and most effective way of getting the woman out of the cave.