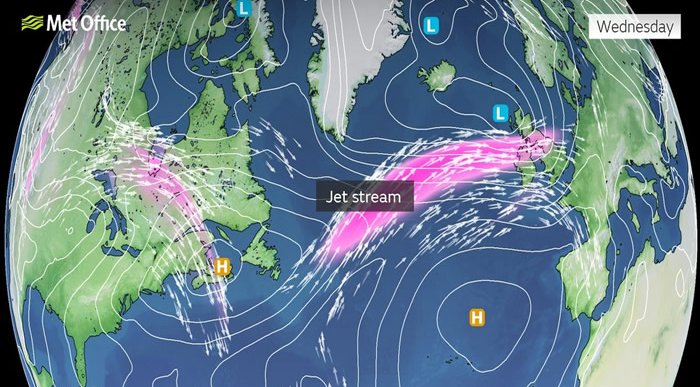 The Met Office has warned of a ferocious Atlantic jet stream storm hitting Britain with heavy rain and strong winds.

According to a Met Office alert this Sunday, May 22, Britain’s mini-heatwave is about to come to a cold end. A ferocious jet stream from the Atlantic is reportedly poised to bring torrential rain, gale-force winds, and plunging temperatures to the country this coming week.

“The strengthening of the jet stream increases the chances of low-pressure systems developing over the Atlantic being pushed towards the UK”, explained Dan Rudman, deputy chief meteorologist at the Met Office.

He added, “Although there are still some details to be determined on the depth and timings of these lows, what we do know is that there’s some unsettled weather on the way next week, with some strong winds likely from the middle of the week, especially in the north”.

In the coming days, Britain could see winds of up to 70mph, with around four inches of rain falling in some parts. Temperatures in the southeast are likely to fall into the mid-20s, while the rest of the country could be anywhere between the mid to high-teens.

Western parts of the UK will experience strong winds, with rain soaking other parts of Britain. Areas of central and southern Britain could well escape this bad weather and experience clear skies and temperatures above average for the time of year.

“A fresher airflow from the west this weekend will bring some fairly mixed conditions with some showers and some longer spells of rain”, commented Aidan McGivern, a Met Office meteorologist. “It will feel cool where we have cloudier conditions in Scotland, and here will see heavy showers at tines”, he continued.

Mr McGivern added, “It is staying largely dry in the southeast into Sunday, with some sunny spells, and temperatures will be a little higher than on Saturday”.

Recent weather forecasts have seen unpredictable changes, even by the hour, but for next week, the majority of experts seem to agree that the Atlantic front will bring unsettled weather.

🌦️ There's mixed fortunes across the UK as we start #Sunday