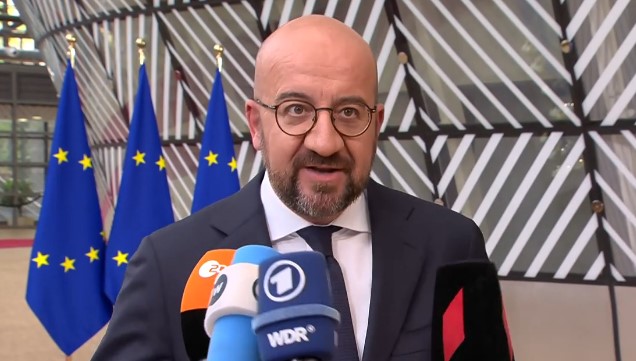 Image of Charles Michel, the President of the European Council. Credit: [email protected]

In a bid to cut the Kremlin’s financing, the EU has agreed to embargo two-thirds of Russian oil imports.

During a marathon summit in Brussels this Monday, May 30, EU leaders finally reached an agreement late in the evening to place an embargo on Russian oil imports. This applies to supplies brought in by sea, while allowing a temporary exemption for oil delivered by pipeline.

As stated in a tweet by Charles Michel, the President of the European Council, leaders had been aiming to cut Russian oil exports, in order to reduce “a huge source of financing for its war machine”. This sixth package of sanctions will immediately affect up to 75 per cent of Russian oil imports. By the end of 2022, the EU objective is to have banned 90 per cent of Russian oil.

According to a senior EU diplomat who spoke to the Associated Press, Ukrainian President Volodymyr Zelenskyy made an address to the EU leaders. He reportedly asked them: “Why are you dependent on Russia … Why can Russia still earn almost a billion euros a day by selling energy?”.

Five previous rounds of sanctions on Russia and many of its senior officials, oligarchs, banks, and even President Vladimir Putin himself, had been passed without any problem. However, Monday’s package took some time to be agreed, after it had first been announced on May 4.

Around 25 per cent of Europe’s oil, and 40 per cent of natural gas supplies historically, come from Russia. President Zelenskyy’s argument is that these imports are financing Putin’s ongoing invasion of Ukraine.

Viktor Orban, the recently re-elected Prime Minister of Hungary had caused a delay in the decision after demanding that oil supplies to his country must be guaranteed before he would agree to the latest sanctions.

It will allow a ban on oil imports from #Russia.