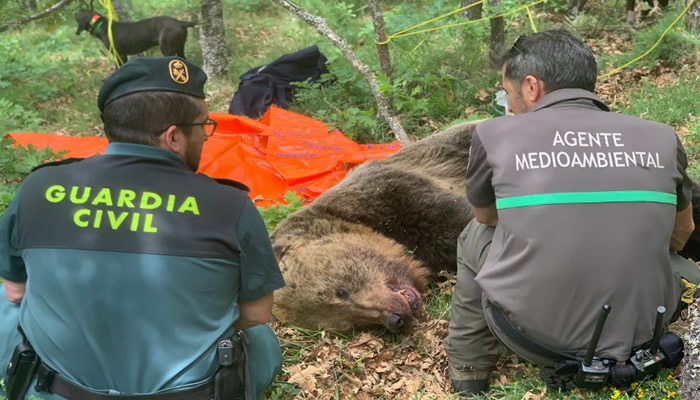 A search team in Castilla y Leon, found the body of a brown bear, believed to have died after a fight with a female.

This Monday, June 6, an operation led by the Ministry of the Environment of the Junta de Castilla y Leon located the body of a brown bear. It had fallen down a cliff during a confrontation with a female, which is also believed to be seriously injured and is with her calf.

As reported by the Junta in a statement, their search team tracked the bear to the surroundings of the Peña de Santa Lucia, in the Palentina mountain. They hoped to locate two adult specimens of brown bear, a male and a female, along with a bear cub.

Apparently, an adult male brown bear, in the heat of the mating season, confronted a female accompanied by a cub. Their fight appears to have ended up with both of the adults thrown off the cliff from a height of several tens of metres.

Early on Monday morning, the members of the search party managed to locate the body of the male, a 217kg brown bear, but the search for the female and her cub continues.

The death of the female has not been confirmed, but from the extreme severity of the injuries in light of the images and traces of blood observed this morning, it was possible to locate the cave where she has taken refuge.

During the afternoon the interior of the cave was monitored by a remote team, prioritising the safety of the entire operation. The bear cub was observed during the morning, although visual contact was lost later after it entered one of the many caves in the area, which are very difficult for humans to access.

Right now, the priority of the operation is, in addition to confirming the extent of the injuries to the female, the location and capture of the bear cub. It is important to guarantee its survival by placing it in specialized facilities of the Castilla y Leon authorities until it reaches the necessary weight to fend for itself autonomously.