BREAKING: Finland and Sweden free to join NATO after Turkey lifts its veto 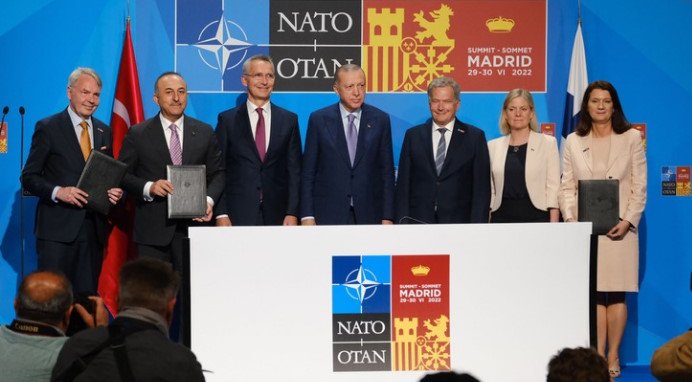 After Turkey lifted its veto, Finland and Sweden are now free to pursue their intention of joining NATO.

NATO Secretary-General Jens Stoltenberg, announced on his official Twitter profile @jensstoltenberg this afternoon, Tuesday, June 28, that Turkey had lifted its veto on Finland and Sweden joining the Atlantic Alliance. Turkish president, Recep Tayip Erdogan, raised his reservations that had until now been blocking a negotiation.

“We have an agreement that allows Sweden and Finland to join NATO”, Stoltenberg said from the Ifema press room. “Turkey, Finland, and Sweden have signed a memorandum that respects Turkey’s concerns, including arms exports, and the fight against terrorism”, continued the Norwegian, who had participated in the negotiations held between the three countries.

The meeting had taken place between Stoltenberg, Erdogan, Swedish Prime Minister Magdalena Andersson, and Sauli Niinisto, the President of the Republic of Finland.

The incorporation of new countries to the Alliance requires the unanimous vote of the thirty member states to move forward. “No country has suffered more terrorist attacks than Turkey, including those of the PKK,” added Stoltenberg,

He was referencing the thorny issue that had been a stumbling block in the negotiations. Sweden has a population of about 100,000 Kurds. “Sweden and Finland have committed to fighting the PKK, and reached an extradition agreement with Turkey. Turkey has agreed to support Finland and Sweden to join NATO”, he detailed.

Speaking this morning, Pedro Sanchez, the President of the Government, stated that he believed that Sweden and Finland will probably join the Alliance, if not now, ‘perhaps later’. Prior to his arrival in Madrid, President Erdogan had demanded “results, not just words” from Sweden and Finland.

Erdogan is scheduled to meet with US President Joe Biden following a telephone conversation between the two. Among other issues, it is believed they will discuss the ‘stagnation’ in the renewal of the F-16 fighter-bomber fleet. Jake Sullivan, the United States National Security Adviser, confirmed that the meeting will take place tomorrow, Wednesday, June 29.

Joe Biden landed this afternoon in the military airbase of Torrejon de Ardoz, where he was received by King Felipe VI of Spain.

Stoltenberg explained yesterday, Monday, June 27, that: “The candidatures of Sweden and Finland will strengthen NATO, but an ally, Turkey, has expressed specific security concerns. We must take them into account. The only thing I can promise is that we are working as hard as possible to find a solution as soon as possible”.