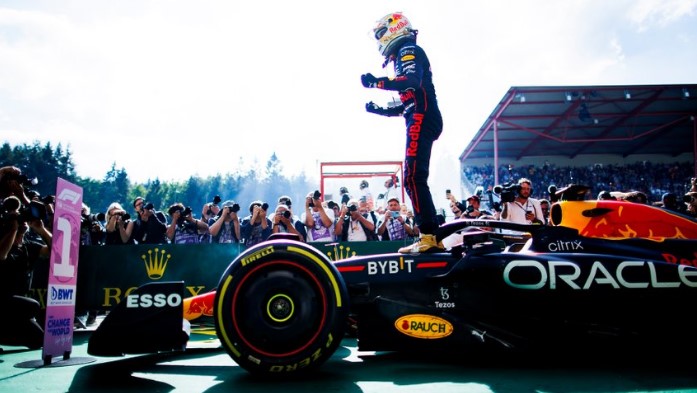 A magnificent drive by the current F1 world champion Max Verstappen today, Sunday, August 28 at the legendary Spa-Francorchamps circuit saw him win the Belgian Grand Prix. The Dutchman was unstoppable as he roared from 14th on the starting grid to take the chequered flag.

The Red Bull was simply unbeatable, as proved by Sergio Perez coming home in second place, with both drivers totally dominating the race. By the end of the first lap, Verstappen had already picked off several drivers to move into eighth position.

This win completes a perfect weekend for us @redbullracing. The car was unreal today, it felt like a rocketship 🚀

We’ll keep pushing as we want more of these, starting next week in Zandvoort pic.twitter.com/D3uQAZm3lE

His ninth win in 14 races this season leaves the Red Bull man with what already looks like an unassailable lead in the championship. Ferrari’s Charles LeClerc, who was his main rival at the start of the season, finds himself languishing 98 points behind Verstappen after finishing sixth today.

Verstappen sizes up Sainz and then passes the Spaniard with ease #BelgianGP #F1 pic.twitter.com/OiWi3HrWnw

Both drivers had fallen foul of grid penalties – along with five other drivers – meaning they started from the back of the grid. The Frenchman finished in fifth but was demoted one position for speeding in the pit lane, picking up a five-second penalty. LeClerc is now third in the table, five points behind Perez.

Carlos Sainz started today in pole position but had to settle for the remaining spot on the podium. George Russell completed another brilliant drive in the Mercedes to clinch a fourth-place finish His teammate Lewis Hamilton fell foul of a collision with the Alpine of Fernando Alonso as they headed around Les Combes on Lap 1.

Hamilton’s car became airborne and he subsequently ground to a halt further along the track. Alonso finished the race in a creditable fifth, with his teammate Esteban Ocon not far behind in seventh. Sebastian Vettel took the Aston Martin to eighth, Pierre Gasly drove the AlfaTauri to ninth, and the Williams of Alex Albon rounded out the top 10.