Woman caught red-handed in Ourense, Galicia, in possession of items to ignite a forest fire 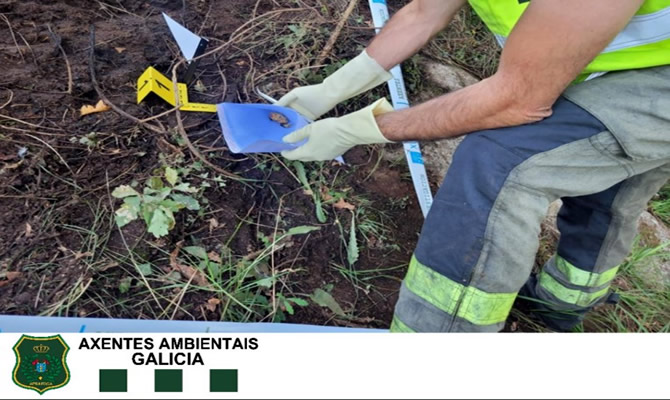 Image of UIFO officer at the scene of an alleged arson attempt. Credit: [email protected]

A woman was caught red-handed in the Ourense municipality of Amoeiro in possession of ignition tablets and a lighter with the alleged intention of starting a fire.

A woman was reportedly caught red-handed in the Ourense municipality of Amoeiro in possession of ignition tablets and a lighter with the alleged intention to start a forest fire. This was revealed by the Forest Fire Investigation Unit (UIFO) of the Ministry of Rural Affairs on Saturday, August 27.

According to the Xunta of Galicia, UIFO officers had already established a surveillance operation for several days in the Trasalba parish of that municipality. This had been initiated after detecting the existence of arson activity.

With the collaboration of the Miño-Arnoia Forestry District staff, traces of incendiary devices and ignition tablets were found in all seven fires registered in the area since August 13. Thankfully, due to the rapid action of the fire prevention and extinction service, the total area affected by these seven fires did not reach one hectare.

The investigation was carried out jointly with officers of the Autonomous Police of the Ourense headquarters, and the alleged perpetrator of these fires took legal action as the investigated party.

This latest operation is added to those carried out throughout this summer by UIFO officers. Previously, an incendiary device and a cigarette butt with an ignition system had been discovered in the forest district of Vigo-Baixo Miño. These were clearly designed to be deposited in the forest, and were fire retardant.

During the course of their surveillance work, officers also found newspapers piled up at the starting point of two fire outbreaks recorded in the Caldas-O Salnes forest district. A lighting pill was also located in another outbreak in the Santiago-Meseta Interior district.

All these indications support the intentionality of the fires being lit premeditatedly. As reported by the Ministry of Rural Affairs, other lines of investigation are also open that will conclude in the arrest of the alleged perpetrators.

The Xunta of Galicia has warned that when it is proven that a fire was caused deliberately, the guilty party will pay for everything, with prison sentences, and using their own assets. Culprits will not go unpunished they insisted, and they will have to pay the costs incurred when extinguishing the fires, because, apart from damaging the mountains, they put people’s lives at risk.