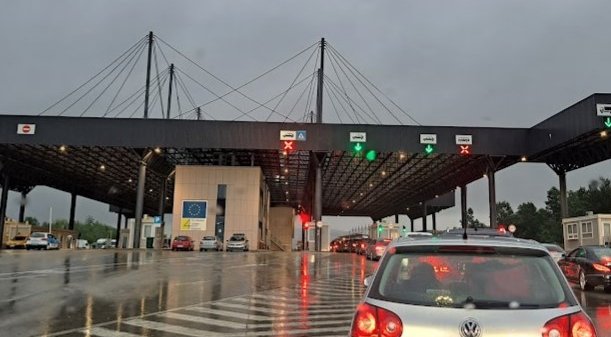 Image of the border crossing at Merdare between Kosovo and Serbia. Credit: Google maps - Hoti Arben

An attack was carried out by unknown assailants on a Kosovo border police station in the region of Zubin Potok.

Kosovo police announced today, Thursday, November 3, that a firearm was fired at the border police station in the village of Jasenovik, in the territories of the municipality of Zubin Potok, located in the Mitrovica district, where the majority of residents are Serbian.

#BREAKING 🇽🇰KOSOVO POLICE: UNIDENTIFIED PEOPLE OPENED FIRE ON THE POLICE BASE IN JASENOVIK, NEAR ZUBINA POTOK.

According to the statement, the attack took place on the evening of Wednesday 2, when officers heard two gunshots in a row. “The competent police unit found shell casings from the bullet that hit the police border control station in Yasenovik,”. the statement said. It added that the Counterterrorism Authority is investigating suspected terrorist acts.

This is not the first attack on Kooswa police in the north and authorities blame it on ‘criminal groups’. Interior Minister Xhelal Svecla said earlier that: “illegal groups in northern Kosovo have protection and public support from certain Serbian structures”.

The attacks were earlier condemned by representatives of the Serb List, the leading Kosovo Serb party backed by Belgrade, as well as Serbian officials, saying that they could not be linked to Serbia, as reported by Radio Slobodna Europa on its Twitter profile @RSE_Balkan.

This event follows days of unrest in the Balkans with a drone sighted entering Serbian airspace and reportedly getting shot down. The incident occurred over the Serbian Army barracks near the town of Raska, with the device blasted out of the sky on the orders of President Vučić.