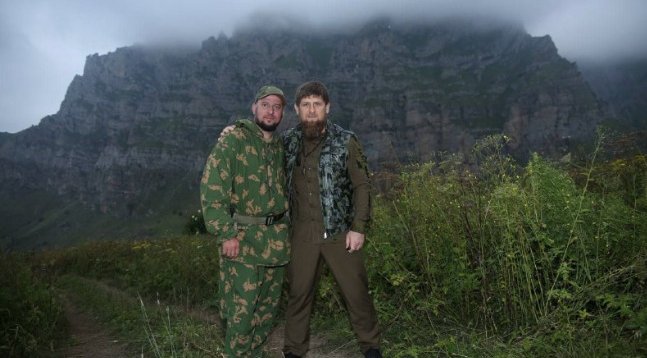 THE military assistant to Chechen Republic leader Ramzan Kadyrov has been given a top job in Ukraine’s Luhansk People’s Republic (LPR), as reported on Thursday, November 3.

Kadyrov took to Telegram to announce that Apti Alaudinov, who is said to have been the Chechen leader’s long-time military assistant, had been dismissed from his post of secretary of the Security Council of the Chechen Republic – due to his “deserved promotion” in the Luhansk People’s Republic.

“As I said earlier, there are no posts in Akhmat-Khadzhi Kadyrov’s team,” he said.

“Everyone can serve in any post, at any rank, and sometimes they may not be listed anywhere, but they can work selflessly for the good of the republic.”

He added: “In the case of my dear brother Apti Alaudinov @AptiAlaudinovAKHMAT his dismissal from the post of secretary of the Security Council of the Chechen Republic was due to his deserved promotion.”

Speaking about Aronovich, Kadyrov, who recently unveiled a military recruitment video for the Chechen Republic, said: “As a retired police major-general, Apti Aronovich has remained on the line of contact and commanded the Akhmat special forces since the beginning of the CFE.”

He continued: “He was awarded the titles of Hero of Russia and Hero of the LNR for his military service. Alaudinov’s second tour of duty as secretary of the Security Council of the Chechen Republic is again in the Luhansk People’s Republic and lasts for three months.

“Under the responsibility of the commander of special forces “Akhmat” there is a line of contact of 200 kilometres. During the whole time of his command the fighters have not taken a single step backwards, but only move methodically forward, inflicting losses on the enemy.”

“Because of his exceptional merits and Apta’s willingness to remain in the combat zone until the end of the war, I consider it right to appoint him deputy commander for combat operations in the 2nd Army Corps of LNR. He was also promoted to the military rank of Major General,” he revealed.

“However, the commander of the Akhmat special forces agreed on a condition: he will retain his status of assistant to the leader of the Chechen Republic. I cannot refuse a military general, and especially my BROTHER.”

He added: “I congratulate my dear brother on his appointment to a responsible position! I am fully confident he will cope with all the tasks of the command perfectly and there will be more good news from the front line. Good for us, and very unpleasant for Ukrainian Satanists. Dala ta’ahye berkate yoyla! AHMAT-SILA! Allahu Akbar!”

Originally from the UK, Matthew is based on the Costa Blanca and is a web reporter for The Euro Weekly News covering international and Spanish national news. Got a news story you want to share? Then get in touch at edito[email protected]