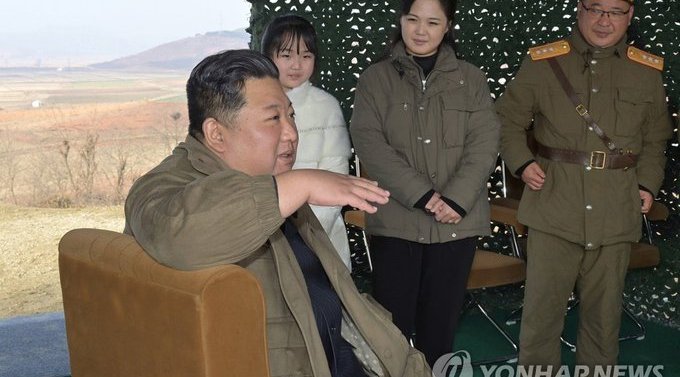 The North Korean leader Kim Jong-un has revealed a daughter who has never been publicly acknowledged before.

Pictures of the leader with the young girl, whose age or name were not revealed by local media, appeared following the latest missile tests.

State news agency KCNA reported her presence at the missile launch on Saturday, November 19 publishing pictures of the dictator walking hand in hand with the young girl as they viewed the missiles and the facility.

Michael Madden, a North Korea leadership expert at the Stimson Centre in Washington said: “This is the first observed occasion where we have seen Kim Jong-un’s daughter at a public event.

“It is highly significant and represents a certain degree of comfort on Kim Jong-un’s part that he would bring her out in public in such fashion.”

The girl was first mentioned back in 2013 by former basketball star Dennis Rodman, who had visited the home of the leader. He said that Kim had a daughter names Ju Ae, however that has never been confirmed.

It is understood that he may have as many as three children, a boy and two girls.

The secretive leader’s daughter Ju Ae is estimated to be about 12-13 years of age. That means she won’t be far off going to university or joining the military.

Madden added: “This would indicate that she will be educated and trained to go into leadership – it could be preparing for her to assume the central leader’s position, or she could become an adviser and behind-the-scenes player like her aunt.”

Ken Gause, a North Korea leadership expert with CNA, a US-based non-profit research organisation said the presence of the girl and her mother Ri Sol Ju was sending a message to the ruling elite.

“Whenever Ri Sol Ju appears, there is strategic messaging involved. Normally designed to tamp down tensions, counter other aggressive messaging (like ballistic tests) or show Kim family cohesion in times of internal troubles.”

Kim has never said who would be his successor and with few details known about his children, speculation is rife about who would take over and on what basis.

The revealing by Kim Jong-un of his daughter at the ballistic missile test will have sent a message to the ruling elite that his is grooming at least one of his children to take over at some point in the future.