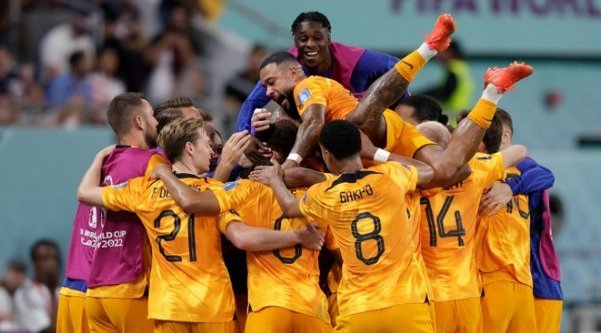 Image of the Dutch players celebrating a win over the USA. Credit: [email protected]

The Netherlands survived a late scare before beating the USA 3-1 to move into the last eight of the 2022 Qatar World Cup.

The Netherlands and USA met today, Saturday, December 3, in the first of the ’round of 16′ matches in the 2022 Qatar World Cup. They faced off in Doha’s Khalifa International Stadium with a quarter-final spot at stake.

Louis van Gaal’s side put on an excellent display of attacking but it was the Americans who started with the best opportunities. ‘Captain America’ Christian Pulisic – back after injuring himself in their win over Iran – was foiled by Dutch keeper Andries Noppert in the opening minutes.

Tyler Adams put him clean through on goal but the outstretched leg of the goalkeeper denied an early strike which could have changed the course of the game had he scored.

Memphis Depay found the back of the net in the 10th minute after a move that included 21 passes. Denzel Dumfries provided the final cross and the winger converted to put his team in front.

Another Dumfries pass led to Daley Blind slotting a second goal for the Dutch in added time of the first half. The USA had been pressing but really lacked a class striker who could capitalise on some good moves.

A nervous atmosphere developed after Pulisic crossed and Haji Wright saw his shot deflected into the net for 2-1 after 76 minutes. The tension was short-lived though when Blind teed up his fellow full-back Dumfries who half-volleyed the ball into the goal to settle the match. Holland will now face the winners of today’s other game between Argentina and Australia.