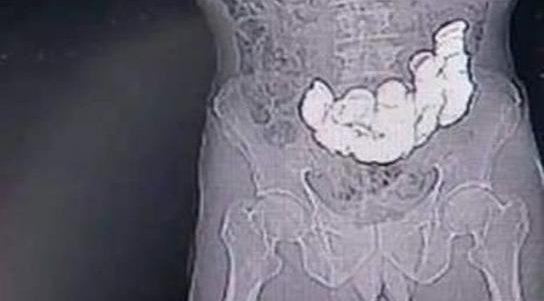 A man who went to the doctors complaining he was bloated and had severe abdominal pains was found to full of money, 187 coins to be exact.

According to news reports on Saturday, December 2 the man from Lingsugur in India underwent a scan that showed more than 233 items in his tummy, 187 of which were coins of various denominations.

It is not known how or why the man came to have swallowed all the coins, but it did result in his being hospitalised and undergoing an emergency operation to remove the items.

Doctors at the Taluka General Hospital believe he swallowed the coins over a two- or three-month period after which he became ill, experienced bloating, vomiting and abdominal pain.  All told he swallowed around 1.5kgs of money.

Doctors undertook two-hour long surgery to save the man’s life saying that many of the coins and objects were lodged in places that meant he would not pass them.

They explained at first, they thought he had a tumour so an endoscopy was undertaken and that’s when they realised what they could see on the scans was not a tumour but were in fact coins.

A statement issued by the doctors said: “Based on his symptoms, we did an X-ray and endoscopy and found coins in his stomach.

So, we decided to operate it. The stomach was enormously dilated. A bunch of coins were stuck in different places.”

They added that he had to be treated for dehydration and other minor problems but that the operation was a success and that he was now in a stable condition.

Doctors and the family are not trying to understand how the man who suffered severe abdominal pains came to be contain a tummy full of money.