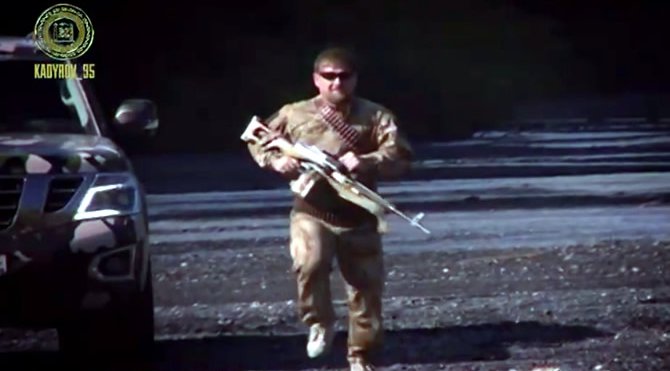 Ramzan Kadyrov, the leader of Chechnya, has been mocked after he released a video showing him running in slow motion dressed in full battle fatigues carrying a heavy machine gun as loud music plays.

Ramzan Kadyrov, the notorious leader of Chechnya has come in for serious mocking on social media, especially among Ukrainians. In what appears to be a bizarre promotional video, he was seen running at full speed across the terrain in full battle fatigues, while a fleet of SUVs drove behind him.

One user on Twitter asked if he was being advised by Steven Seagal as the footage resembled a 1980s action movie with its loud music in the background.

He splashed through large puddles of water and ended up firing a heavy machine gun into the air as the vehicles drove around him in a circle with their occupants hanging out of the windows and also firing their weapons in the air.

Kadyrov posted the video on his Telegram channel, accompanied by verses. It read:
“The molten sun floats
Bloody stain on the Dnieper…
We sit and wait for the Teutonians
“The Teutonians are coming to us…

Sitting with Peter “at the ready” –
With me my “pretty boy” Peka,
My friend with his sniper rifle
Quiet as a Russian river…

We’re waiting… The sacred FatIha
I repeat like a guardian of the Faith!
“I’ll repeat the Sacred Fatigue
Peter recites the Lord’s Prayer…

We wait… Diligence and courage…
Fearless Rus and brave Nart,
Under a common flag, in the same line.
Ready to take our “Saint-Gothard”!

We’re waiting… We’d only like to get into it!
We’ll be good at it!
The Ryazan Bear is on the move!
The Chechen Wolf is ready for the slaughter!

Fight us in the heat of battle!!!
You don’t like your insolence!
Only the barking of a dog
♪ In the morning we heard a dog barking ♪

♪ With the One God in unequal battle ♪
In our hearts we carry the truth…
Pray, O Orthodox Knight!
Pray the warrior Muslime!

He signed off by saying: “From the author. PK – 7.62 mm Kalashnikov machine gun”.