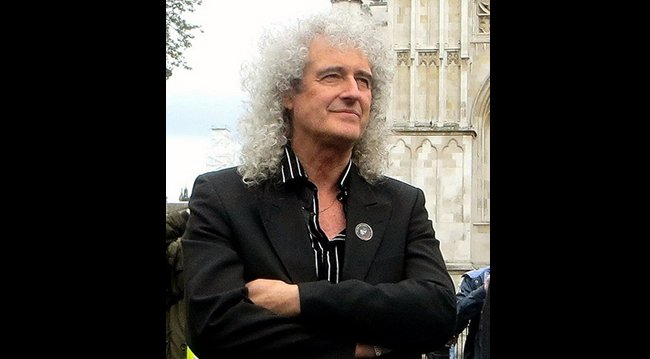 Queen guitarist Brian May is among those to be knighted as King Charles’ first New Year’s Honours list was revealed. He famously performed on the roof of Buckingham Palace for the Queen’s Golden Jubilee in 2002, playing ‘God Save The Queen’.

May also performed opposite Buckingham Palace atop the Victoria Monument to open this summer’s Platinum Jubilee concert. The instantly recognisable 75-year-old musician will receive a knighthood for his services to music and charity.

‘I don’t think I expected it because I haven’t been conducting the kind of life which I thought would lead to a knighthood’, he commented. ‘I’ve been quite vociferous in criticising recent governments, for a start. I imagined I was on the wrong side for all that stuff. It’s a nice surprise to have this honour put upon me’.

Grayson Perry, the 62-year-old flamboyant cross-dresser also receives a knighthood. He already has a Turner Prize and a television Bafta, and now adds this new honour for his services to the arts. Perry is recognised for his work with tapestries, sculpture, and pottery.

In 2014 he attended Buckingham Palace wearing a midnight-blue dress, jacket and heels to collect a CBE from the then-Prince Charles. ‘When I got the call, my first thought was what am I going to wear? It’s a serious thing. I’m not going to compromise my identity as Britain’s pre-eminent transvestite’, Perry later told reporters.

The award of Companion of Honour goes to Dame Mary Quant. Membership in this prestigious group of recipients is limited to only 65 people. It currently includes Sirs Paul McCartney and Elton John. It is bestowed upon those who have made a long-standing contribution to medicine, science, government, or the arts.

Quant became a Dame in 2014 for her services to fashion. The 92-year-old fashion designer is recognised as inventing the mini-skirt in the 1960s. After receiving the honour, she told the media that it was: ‘the girls on King’s Road who invented the mini. I wore them very short and the customers would say, ‘shorter, shorter”.

Comedian Frank Skinner – his real name is Christopher Collins – is the recipient of an MBE for services to entertainment. The 65-year-old funnyman joked that he avoided telling his family in case it was ‘some sort of administrative error’.

For services to drama, actors David Harewood and Stephen Graham pick up OBEs. Harewood has long been an active campaigner for mental health and race issues. The 57-year-old starred in Homeland.

Graham already has a Bafta award to his name after starring alongside Sean Bean in the prison drama ‘Time’. He also received an International Emmy for his role in the care-home drama Help. Now the 49-year-old Liverpudlian star of ‘This Is England, and ‘Line Of Duty’ adds an OBE to his collection.

Olympic sporting legend Denise Lewis – who won the heptathlon gold for Great Britain at the 2000 Sydney Olympics – becomes a Dame for services to sport. The 50-year-old BBC pundit described it as an ‘incredible honour’.

‘I was endeared into the nation at that time, and it’s almost like going full circle having this damehood 22 years after that performance. It’s very emotional’, she said.

Also in sport, for their services to football and charity, Chris Kamara, the footballer turned pundit, collects an MBE, as does Liverpool and Scotland defender Andy Robertson. Four of England’s victorious Euro 2022 Lionesses also collect gongs, as does their coach.

Rachel Riley, the 36-year-old former Countdown star is honoured with an MBE for her efforts at combatting anti-Semitism and of raising awareness of the Holocaust. Chief Rabbi Ephraim Mirvis received a knighthood for his services to the Jewish community, interfaith relations and education.

After receiving it, the 66-year-old warned that global anti-Semitism was ‘on the rise’. Mirvis pointed to recent comments made by rapper Kanye West, insisting they: ‘do make a very significant mark, and we shouldn’t be silent in the wake of such comments and actions’.

Her services to public health and charity see 68-year-old GB News host Anne Diamond collect an OBE. Her fellow journalist, 78-year-old John Suchet, an ambassador for the Alzheimer’s Society, also picks up an OBE for his services to charity.

Co-founder of the Born Free Foundation, 91-year-old actress Virginia McKenna has been made a Dame. In recognition of his fundraising work during the pandemic, 52-year-old DJ Spoony, the BBC Radio 2 presenter, receives a British Empire Medal.