‘WE QUIT!’: Extinction Rebellion insists it will halt disruptive demonstrations in 2023 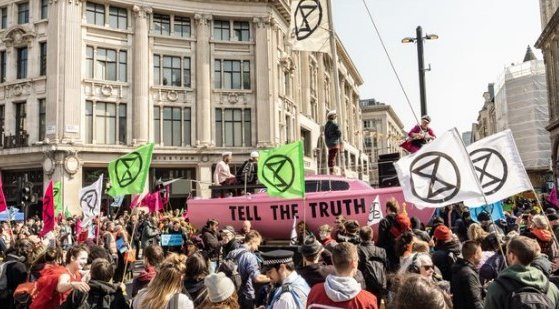 There will be no more disruptive demonstrations staged in 2023 insists the eco-group Extinction Rebellion.

Eco group Extinction Rebellion announced today, Sunday, January 1, that it intends to terminate all of its disruptive demonstrations. They vowed to turn instead to ‘talking’ claiming that their activities simply have not worked in a statement posted on its Twitter profile.

Our #NewYearsResolution is to halt our tactics of public disruption. Instead, we call on everyone to help us disrupt our corrupt government.#ChooseYourFuture & join us: 21 April, Parliament. pic.twitter.com/FZlCeaHj4F

In recent months the climate protest group has been involved in vandalising public buildings, dangling from bridges, blocking roads, and smashing windows. Their often controversial stunts have seen people being late for hospital appointments or work, along with causing traffic jams during rush hour periods.

“Extinction Rebellion is making a bold New Year’s resolution for 2023: we’re quitting actions that target the disruption of the public. This is a big decision”, said the tweet from the activists.

It added: “Public disruption has raised the alarm on the climate and ecological emergency incredibly successfully. But while the alarm has been raised, nothing has really changed. So in 2023, it’s time to try something different”.

XR members will “prioritise attendance over arrest” this year said the statement, and “relationships over roadblocks”. This means “taking disruption directly to the UK’s seat of power”, they insisted.

A spokesperson for Just Stop Oil said that it has no intention of stopping, and will even potentially ramp up its actions in 2023. The UK was: “barrelling down the highway to the loss of ordered society”, they said, adding that means its members must “move from disobedience into civil resistance”, as reported by thesun.co.uk.