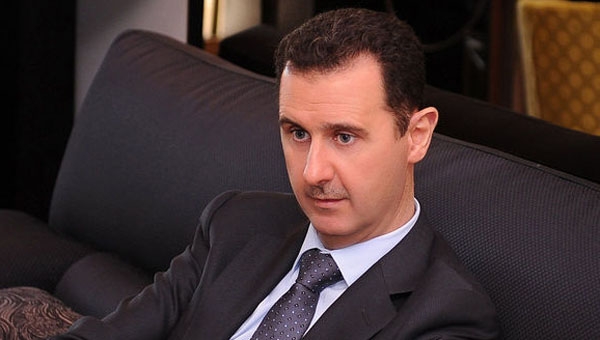 “These mechanisms will not be fulfilled unilaterally,” Assad told Russian TV news channel Rossiya 24 as U.S. Secretary of State John Kerry and his Russian counterpart were to hold a second day of meetings in Geneva, Switzerland, in a push to disarm Syria of chemical weapons.

Assad told the Russian network: “When we see that the United States really wants stability in our region, will stop their threats and attack plans, and stop their arms supplies to terrorists, then we will consider that we can go ahead and complete the necessary processes so that they can be valid and acceptable for Syria. There are no one-sided mechanisms.”

The Syrian leader also demanded Israel give up its nuclear weapons before he agrees to comply on chemical weapons. Israel does not acknowledge possessing nuclear weapons.

Assuming his preconditions are met, Assad said, he was prepared to sign the international convention banning chemical weapons and would adhere to its “standard procedure” of handing over information about the stockpiles a month later.

Kerry told reporters in Geneva he had a much shorter time frame in mind.

“There is nothing ‘standard’ about this process,” Kerry said before holding his first meeting with Russian Foreign Minister Sergei Lavrov.

Kerry added Assad was not a party to the negotiations.

Kerry and Lavrov spoke with reporters before holding their first meeting, combining upbeat comments with points of contention.

“We do believe there is a way to get this done,” Kerry said.

But he repeated President Obama’s warning that if diplomacy fails, “force might be necessary to deter and degrade Assad’s capacity to deliver these weapons.”

“We proceed from the fact that the solution of this problem will make unnecessary any strike on the Syrian Arab Republic,” Lavrov said through an interpreter.

Kerry responded it was “only the credible threat” of military action that created the current diplomatic opening.

He said a military option was needed to ensure Assad fulfilled his promises and said Washington would remain ready to strike.

Obama said at the White House he hoped the negotiations “yield a concrete result.”

He said Kerry would work hard “over the next several days to see what the possibilities are.”

In New York a spokesman for U.N. Secretary General Ban Ki-moon confirmed for reporters the world body received a document from the Assad regime indicating its commitment to comply with the Chemical Weapons Convention.

The document was being translated from Arabic, Farhan Haq said.

It was not immediately clear if it included any preconditions.

Security Council members are expected to hear from Ban Monday on the findings of a U.N. chemical weapons team that probed an Aug. 21 attack near Damascus the Obama administration says killed more than 1,400 civilians.

The administration alleges the Assad regime used chemical weapons to cause those deaths.

The inspection team’s purpose was to determine if the nerve gas attack occurred, not to lay blame.

But a senior Western official at the United Nations told The Washington Post the inspectors collected “a wealth” of circumstantial evidence pointing to Assad’s forces as responsible.