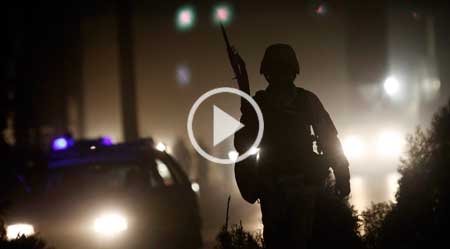 KABUL (Reuters) – The Taliban attacked a convoy of foreign vehicles in Kabul on Friday with gunfire and a suicide car bomb that was heard across the Afghan capital, the first major incident there since July.

Two Afghan civilians were killed and four others wounded, including children, police sources said. There were no reports that the Taliban – which claimed responsibility – sustained casualties.

The attack started around 5 p.m. (1330 GMT) when a convoy of vehicles belonging to foreign forces was attacked by a suicide bomber in a car, close to Green Village, a residential compound for military contractors and other civilian staff, police sources said.

“First there was an explosion in front of Green Village which destroyed two or three vehicles belonging to foreign forces,” a police official said, declining to specify the nationality of those targeted.

There were conflicting reports about what happened next, but the insurgents did not manage to enter the compound.

Taliban spokesman Zabihullah Mujahid said on Twitter: “This attack was carried out on a foreign invaders’ convoy and also the important Green Village centre.”

Rumours of an imminent attack in Kabul had been circulating and Germany had closed its embassy as a precaution. Green Village, in a largely industrial part of eastern Kabul, was targeted by insurgents, including suicide bombers, in May 2012.

The attack follows the capture of a senior Pakistani Taliban commander, Latif Mehsud, by U.S. forces in Afghanistan several weeks ago, an operation that angered the insurgent group as well as the Afghan government.

Earlier this week, the Taliban killed the governor of Logar, a province just south of the capital where Mehsud was captured. Governor Arsala Jamal was a friend of Afghan President Hamid Karzai and ran his 2009 re-election campaign.

Karzai had called Mehsud’s capture a violation of Afghan sovereignty.

In two days of talks last weekend, Karzai and U.S. Secretary of State John Kerry failed to finalise the terms for a continued U.S. military presence after 2014. Failure to reach a deal could force Washington to make a complete withdrawal at the end of 2014, an outcome known as the “zero option”.

Karzai has refused to grant U.S. troops immunity from prosecution and is leaving the matter to the country’s assembly of tribal elders, the Loya Jirga, due to meet next month.

The same issue hobbled similar talks with Iraq in 2011, leading to the end of the U.S. military mission there.