Olympics in the rough as stars get cold feet 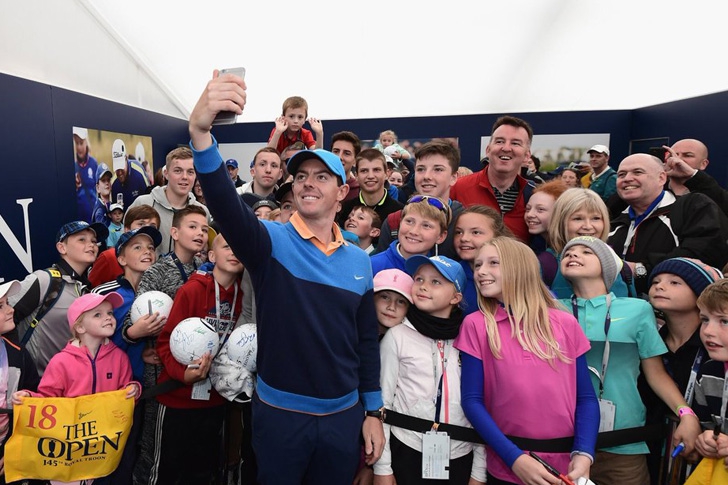 CHEESE: McIlroy poses for a quick selfie with fans after his forthright press conference.

THE buildup to the Open golf championship at Royal Troon has been completely overshadowed by Olympic matters, as Rory McIlroy delivered an admirably candid, albeit scathing appraisal of golf’s return to the games after a 112-year hiatus.

McIlroy pulled out of the Irish team last month, citing fears over the Zika virus, but he was clearly cheesed off with the line of questioning when he was asked which events he would watch, as he replied: “Probably the events like track and field, swimming, diving, the stuff that matters.”

He had earlier expressed his views on drug testing in golf, as he laid into what he clearly believes is a hang loose approach by the sport’s authorities.

“I, on average, probably get tested four to five times a year, which is very little compared to the rest of the Olympic sports,” he said. “HGH (human growth hormone) you can’t really pick it up in a urine test. I could use HGH and get away with it. So I think blood testing is something that needs to happen in golf just to make sure it is a clean sport.”

McIlroy was speaking directly after Jordan Speith, who has also pulled out, meaning none of the world’s top four golfers will take part in Rio, reducing the Olympic tournament to also-ran status and bringing into question its continued involvement beyond the current 2020 cutoff, with the campaign for its inclusion based around proving that the Olympics would be viewed as the pinnacle of the sport.

Spieth did at least appear to have been in two minds over his decision, describing his choice as “the hardest decision I’ve had to make in my life,” although with more than 20 male players having now ruled themselves out of competing in Brazil, it is hard to shake the impression that for certain filthy-rich fairway wanderers it is simply not a priority.

The suspicion is compounded by the fact that only a single woman has declared an unwillingness to participate, while Masters champion Danny Willet, who will play, said: “You’ve got more chance of getting malaria in South Africa than you have in getting Zika when you go to Rio. If there were an Olympic Games in Johannesburg would guys pull out because of malaria? I don’t know.”