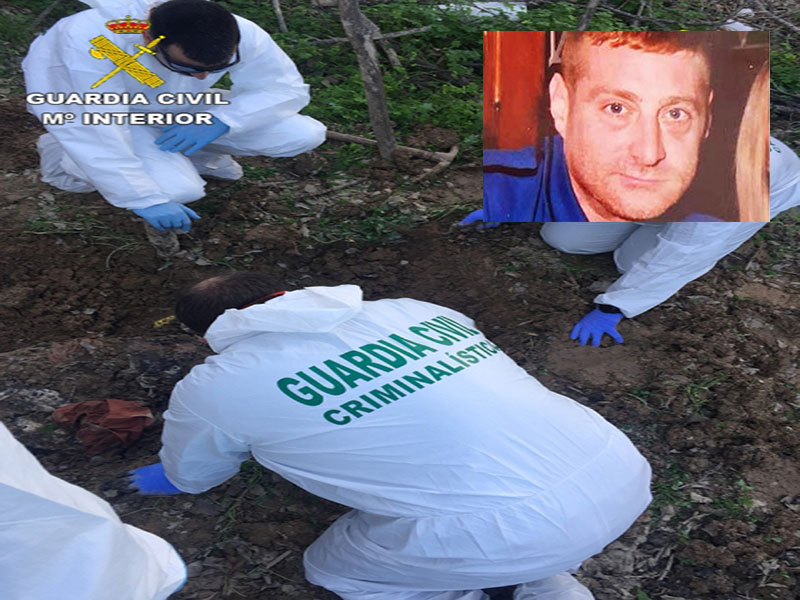 FOLLOWING the five arrests already made after the body of Irishman Carl Carr was discovered buried in a shallow grave alongside two bottles of bleach in the municipality of Rojales, police have now issued an arrest warrant for a second Irishman believed to have witnessed the murder and helped bury the body.

The investigating judge, Juana López Hoyos, of the Number 2 Criminal Court in Torrevieja, has issued a European arrest warrant for the 26-year-old Irishman known as Simon, who fled Spain shortly after Carr was brutally murdered in September last year, returning to his home country.

It is believed from the statement given by one of the protected witnesses, that Simon was present when Carl was battered to death at the property located in the Urbanisation of La Siesta.

Simon was seen with blood stains on his clothes standing next to the body, which had been covered up with a rug in the living room.

While at first Carl’s death was thought to be drugs related, police investigators now think that he was battered to death with a knuckleduster by Wayne P. Walsh, his friend and housemate.

It is thought the motive may have been a love triangle he was involved in with 23-year-old Mily Leonard, Wayne’s on-off girlfriend and mother of his young child, who has also been arrested and remanded in custody.

Investigations have now discovered that after a night out on September 17 last year, Carl and Simon returned to the property they shared with Wayne Walsh with three women.

One of the women went home immediately, another went to sleep and the third, Mily, allegedly proceeded to engage in some kind of sexual activity with Carl in spite of Simon telling them not to.

Seeing as neither Carl nor Mily listened to his warning, Simon is thought to have left the house and went to Cabo Roig looking for Wayne.

The two Irishmen returned later in the early hours of the morning, which is when a heated and angry altercation took place, police say.

One of the witnesses, woke up to hear a lot of shouting in English between Wayne, Carl and Simon coming from the kitchen.

Disturbed by what was taking place, the witness left the house unnoticed and called a taxi to go home, with the taxi driver later telling the police that his passenger had been sobbing heavily as if something terrible had happened.

A statement from the second witness says he turned up at the property and heard Simon shouting at Wayne not to let him in.

He did, however, enter the property and it was obvious that a fight or something similar had taken place, as furniture had been overturned and belongings were all over the place, according to a statement.

Simon also had blood all over him, while nearby, in the middle of the living room, Carl’s body was on the floor covered up by a rug, it is claimed.

Before leaving the property, the witness was asked by Wayne, while laughing, if he wanted to see Carl’s body, to which he replied that he didn’t. Wayne then added: “You’ll end up next to Carl if you say anything to anyone.”

He also claimed that in subsequent telephone conversations with Wayne, the 31-year-old Irishman confessed to killing Carl because of Mily and that himself, Simon and a Spaniard, also remanded in custody, cleaned the house of blood and buried the body together.

The woman at the centre of the case, Mily Leonard, is a young mother formerly known for her party lifestyle and success in modelling.

She has been arrested and is currently in prison with local bar manager, Natalie Edwards, who was allegedly also sleeping with Wayne despite Wayne rekindling his relationship with the mother of his child.

One of the two women is also being investigated for illegal arms possession after a 9mm pistol was found at her home.