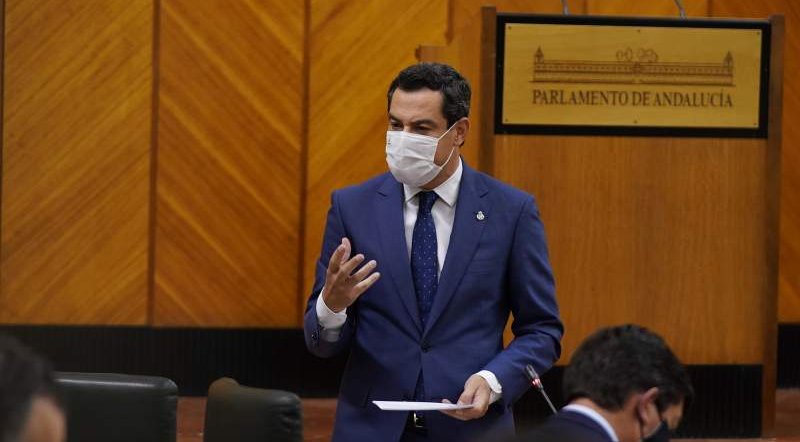 The Leaders of the Partido Popular (PP) and PSOE in Andalucia have held an unprecedented meeting, to the anger of Vox.

The President of the Junta de Andalucia, Juanma Moreno, met the new leader of PSOE-A, Juan Espadas, in Seville on June 25.

Moreno and Espadas said they want to demonstrate a new way of doing politics in Andalucia. But Vox – the PP’s volatile coalition partner – has hit out at Moreno for cozying up with the PSOE in the same week that Prime Minister Pedro Sanchez ratified a law on euthanasia and shortly after he green lighted the pardons of jailed Catalan independence leaders.

“The Andalucians who voted for the change have been betrayed by the PP,” the Andalucian branch of Vox tweeted.

Moreno however, may be shoring up support for his much-vaunted urban planning law which Vox blocked in the Andalucian parliament last month.

The law aims to clarify urban planning rules and streamline procedures and have a positive economic impact in Andalucia, according to the Junta.

Vox abstained from a vote on the law on May 26. The move threw Moreno’s coalition with the ultra-conservative party into jeopardy just days after they called for resignation of the Minister of Equality, Social Policies and Conciliation, Rocio Ruiz, for saying that Andalucia is “waiting” to assist hundreds of vulnerable minors who swam into Ceuta, Spain’s north African enclave, in May.

After Vox boycotted the vote, the opposition immediately labelled Moreno a lame duck and called for snap early elections. Moreno refused and has continued to deny that he will call early elections.

The draft planning law, called the ‘Law for the Promotion of the Sustainability of the Territory (List)’, has now been returned to parliament after languishing with Andalucia’s Governing Council.

On June 13, Juan Espadas, the current mayor of Sevilla, won the PSOE’s primaries in Andalucia with a convincing win over outgoing secretary general of the party, Susana Diaz.

He won with just over 55 per cent of the votes with Diaz trailing on 39 percent. A third challenger, Luis Angel Hierro, garnered less than 6 percent.

Espadas win is a victory for Prime Minister Sanchez but it will also raise questions over the future independence of the PSOE in Andalucia within the larger PSOE grouping.

Moreno has also reached out to the PSOE in Valencia as both autonomous regions claim they have lost out on billions in funds from Madrid.

He is due to address the first plenary session of parliament in Sevilla on July 7. He is expected to reiterate calls for a nation-wide shake up in regional funding and urge other autonomous regions to join forces to demand changes from Prime Minister Pedro Sanchez.

He will also call for “maximum collaboration and coordination” between the different regions as he joins forces with his counterpart in Valencia to pressure the government into making changes to Spain’s regional financing model which has been in place since 2009.

The current system, Moreno says, is short-changing Andalucia millions every day and has led to a cumulative debt of more than 10 billion euros.

His efforts to redress this includes reaching out to his socialist counterpart in Valencia, Ximo Puig, to form an unlikely political partnership to secure regional financing reform.

Puig has accepted an invitation to travel to the San Telmo Palace in Sevilla, the seat of Andalucia’s regional government, in September, a gesture that has surprised observers as Spain’s political environment becomes ever more heated.

Puig and Moreno met on the side-lines of an economic forum in Barcelona earlier this month just hours before Moreno travelled to Madrid for a one-on-one meeting with Prime Minister Pedro Sanchez.

Any change in the financing system has to be voted on by Congress, and the ruling PSOE are reluctant to hold a vote on it if they do not first have guaranteed support from the PP.

The next regional election in Andalucia is due to be held in 2022.