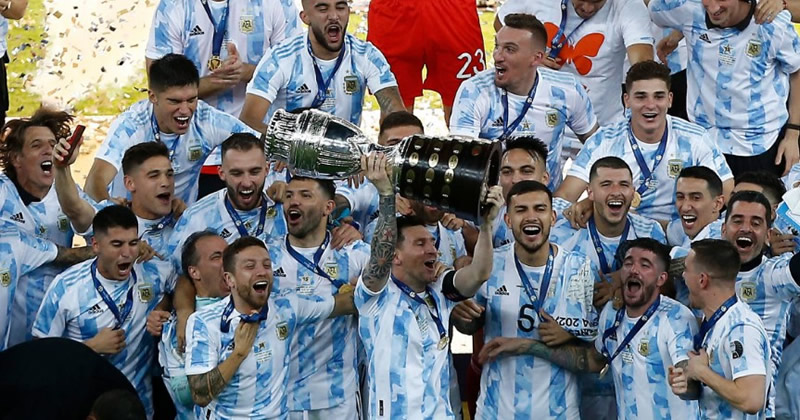 Argentina have beaten Brazil 1-0 in their home stadium of the Maracana, in Rio de Janeiro, in the final of the Copa America 2021, played in front of just 7,000 people, and in the process ended a 28-year trophyless drought by the South American nation that is so famous for the footballing superstars it has produced throughout the years.

The late, Diego Maradona springs instantly to mind, arguably the greatest football player of all time, and another who is up there with him is the current captain of Argentina, the little genius that is Lionel Messi, who with this victory, after playing in ten tournament finals, finally won his first-ever major medal with his country.

As Argentina beat Brazil and the final whistle blew, the 34-year-old Messi fell to the floor, clearly overcome with the occasion, before being surrounded by his teammates who hoisted him up and threw him in the air in celebration of the win.

Brazil had struggled with consistency in front of goal for much of the tournament, and had a nightmare in attack in a match that just never went their way, having just 13 shots during the whole game, but only two actually on target, while Argentina managed just six shots in total.

The match was constantly slowed by the steady number of fouls, 41 in total, which only added to the frustration of the hosts, while Argentina simply sat back and defended their 22nd-minute lead.

Paris St Germain’s Angel di Maria was Argentina’s matchwinner after he took down a lovely pass from Rodrigo de Paul and audaciously chipped it over the top of Manchester City keeper Ederson.

Neymar Jr had an emotional time after the final whistle, as his wait for a winner’s medal continues on the same course as his good friend Messi – having missed out through injury when Brazil won the trophy in 2019 – and the two, who played together at the Nou Camp between 2013 and 2017, stood hugging one another as they waited for the medals to be presented.