Hundreds go out in support of ‘Marbella for its beaches’ 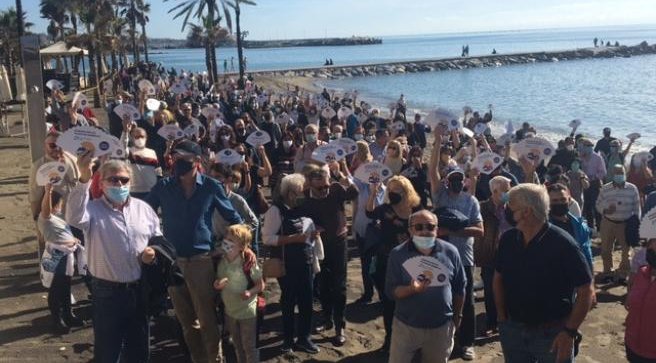 Hundreds go out in support of ‘Marbella for its beaches’

Hundreds go out in support of the march ‘Marbella for its beaches’, promoted by business and tourism groups of the province, the march started at the port of La Bajadilla to the beach of La Fontanilla. At the end of the route, all of those who participated were offered free paella.

“It is a great satisfaction for us to see so many people from Marbella and Sampedra taking part in this march which aims to demand that the central government speeds up the regeneration of the beaches. We cannot wait until 2025 to have beaches in Marbella in good condition. Marbella, for its quality, deserves beaches like those of other luxury tourist destinations. It is essential for businesses and citizens,” said the president of the Association of Hotel Owners of the Costa del Sol (Aehcos), Jose Luque.

He also pointed out that the march ‘Marbella for its beaches’ is “the beginning of a social movement. If we all get up from the couch we will get the government to react so that we have our beaches fixed before 2025. Look at the disaster that was caused from the recent storm consequences it has brought. There is no choice but to stabilise the sand. It’s just a question of taking an interest”, he added.

The representative of the association ‘Espigones Emergidos para Marbella’, Jose Miguel Lima, added that “we want the central government to carry out the project as soon as possible” to stabilise the coastline.

“We are not prepared to wait several years. We want it to be done now, as a matter of urgency. Yesterday, November 20, all the beaches were destroyed, all the beach bars, the promenades,” added Lima, who indicated that the organisers are considering further demonstrations.

The representative of the Association of Beach Businessmen-Costa del Sol, Jose Ravira, pointed out that “Marbella, without breakwaters, will lose its beaches”. “This Sunday I still haven’t been able to open my beach bar because we are still removing the sand that the storm brought in. With the breakwaters, this could have been avoided,” he added.

The initiative, ‘Marbella for its beaches’ has had the support of local chef Dani Garcia, who, in a message on social networks, said that “I never understood why the breakwaters were removed. I have a precious memory of those extremely cool breakwater beaches. I send all my support so that we get back the beaches of my childhood and the childhood of many people in Marbella. Tourists will also appreciate it,” he said.