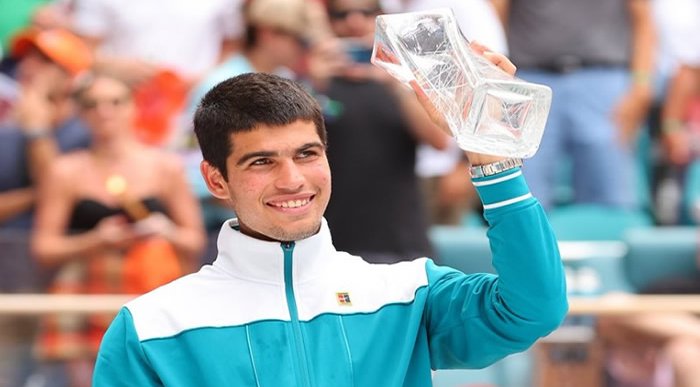 Carlos Alcaraz becomes the first Spaniard, and the youngest tennis player ever, to win the Miami Open

At just 18 years, 11 months old, Spain’s Carlos Alcaraz has won the Miami Open today, Sunday, April 3, at the Hard Rock Stadium in Miami Gardens, Florida. In doing so, Alcaraz is not only the youngest tennis player to ever win this Masters 1,000 title, but he is also the first Spaniard.

Only a few months ago the young star from the province of Murcia confessed that his goal in 2022 was to get into the Top 10 of the world rankings. Today’s win brings him one step closer to that target, as he moves up to No11.

A straight-sets, 7-5 ​and 6-4 win against the 23-year-old Norwegian, Casper Ruud, currently the world No7, was achieved in 1hr 53 minutes. None of the great Spanish tennis stars has ever managed to win this Florida tournament. Bruguera, Moya, Ferrer, and even the legendary Nadal, all failed.

Ruud also has little experience in the Masters 1000, but the way he started the match it looked as though he had been involved in high-profile games all his life. His play was faultless, with both his serve and forehand working perfectly, and showing great aggression. So much so that he was quickly 3-0 in front.

Alcaraz then embarked on a comeback, eventually squaring the set at 4-4, and the Norwegian was suddenly no longer in control. Ruud saved two set points in the 12th game, even going to set point, but the Spaniard foiled him, finally gaining a 7-5 win.

The second set was still a difficult period for the young Spanish star. Incredibly, from 1-4 down, he turned the match around to win the set 6-4, and be crowned champion in Miami, as reported by larazon.es.