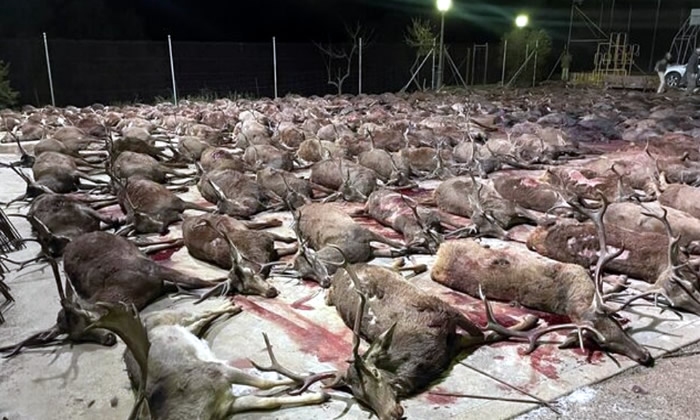 PACMA, the Spanish political party working for animal rights, environmental protection, and social justice, has announced today, Monday, April 18, that it has denounced 73 hunters, along with a farm owner in Cordoba province.

The incident in question occurred on a farm in the Cordoban municipality of Villaviciosa. During a macro-hunting event on the premises, 450 animals were killed. PACMA referenced Article 337 of the Penal Code, which typifies as animal abuse the aggravated death of animals that at some point in their lives have depended on human beings.

Images presented after this killing spree by the 73 hunters showed the dead animals lined up in rows. This ‘massacre’ took place one weekend this January, on the 3,200-hectare farm. According to PACMA, this facility is a regular meeting point for the hunters, where the animals have been raised in captivity.

Javier Luna, the president of the Animalista Party, assures that these types of practices are frequent, and completely dismantle the theories of population control. “In most cases, these animals are raised on farms, fed, and made available to hunters when they reach a certain age. They are animals that, in some way, have depended on the human hand at some point”, he argued.

As pointed out by Mr Luna, Article 337 of the Spanish Penal Code establishes that anyone who “unjustifiably mistreats by any means or procedure, a domesticated or tame animal, an animal habitually domesticated, an animal temporarily or permanently living under human control, or any animal not living in the wild, causing injuries that seriously undermine their health, or subjecting them to sexual exploitation, will be punished”.

According to the PACMA legal team, it considers that each of the hunters, as well as their breeder, are necessary collaborators of these criminal acts. The party is also urging the administrations to urgently review the illegality of hunting farms. They describe them as breeding spaces exclusively for animals of hunting species, to repopulate land, and maintain the possibility of hunting.

Originally from Wales, Chris spent years on the Costa del Sol before moving to the Algarve where he is a web reporter for The Euro Weekly News covering international and Spanish national news. Got a news story you want to share? Then get in touch at [email protected]klynews.com