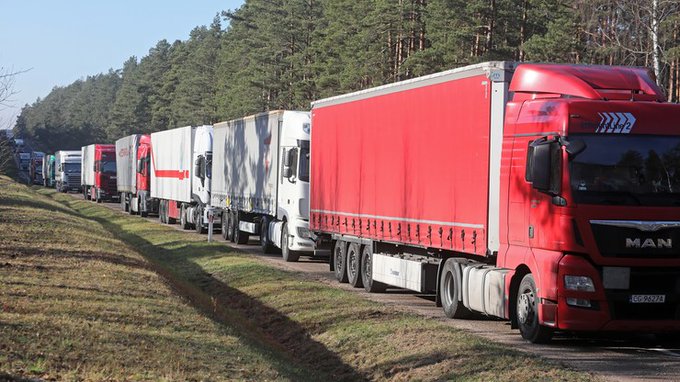 Russian and Belarusian trucks queue to leave the EU ahead of ban deadline Source: Twitter

Hundreds of trucks were seen queuing in a tailback more than 80 kilometres long on Saturday April 16th as Russian and Belarusian drivers tried to leave before the EU ban deadline.

According to local authorities the queue stretched 80 kilometres (50 miles) in Poland at one point, with waiting times of up to 33 hours before they were processed according to the BBC.

Drone footage from Reuters posted on Sunday showed a column of trucks stuck in traffic near the Kozlovichi border crossing on Saturday evening.

Dmitry, a truck driver from Belarus said: “We were driving from Serbia, we stood in a queue in Bobrowniki. But in Bobrowniki we were turned back and asked to go to Kozlovichi. That’s the situation. I’m driving with the load, I don’t know what is going to happen.”

On Friday drivers were left waiting for up to 56 hours at the Bobrowniki checkpoint according to the Financial Times, citing data from Poland’s National Revenue Administration.

It is estimated that around 10,000 Russian and Belarusian vehicles were still in the EU ahead of the deadline, according to Aliaksandr Kuushynau, a Senior Executive at a GPS fleet-tracking company.

Long queues were also reported at Lithuania and Latvia border posts, with the ban that prohibits Russian and Belarusian trucks from carrying goods in the EU. The ban is one of the many sanctions against the two countries in retaliation for the war in Ukraine. Haulers carrying food products, humanitarian aid, and energy have been exempted from the sanctions.

Up to 53 hours waiting time for lorries on Polish-Belarus border due to EU ban for entering its territory by Russian trucks
#Polska #Poland #Ukraine #Russia pic.twitter.com/YLmrfwJxJG

On Sunday morning the queues in Poland had shortened with waiting times down to 12 hours according to the BBC. With the deadline already having passed it is not clear what action if any will be taken against those who did not make the crossing in time, the sanctions regime allowing for the confiscation of vehicles and cargo.

Jan Buczek, head of Poland’s Association of International Road Carriers, said that at least 3,000 Polish trucks in Russia and Belarus may be at risk of retaliation from the two nations.

Buczek told the FT as trucks queue to leave the EU ahead of ban deadline: “We should look for a benign solution. Because any aggressive form of action by Europe against the Russian and Belarusian trucks at the border will instantly spark retaliation against our trucks that are on the way or coming back from markets like Mongolia, Kazakhstan, and Uzbekistan.”