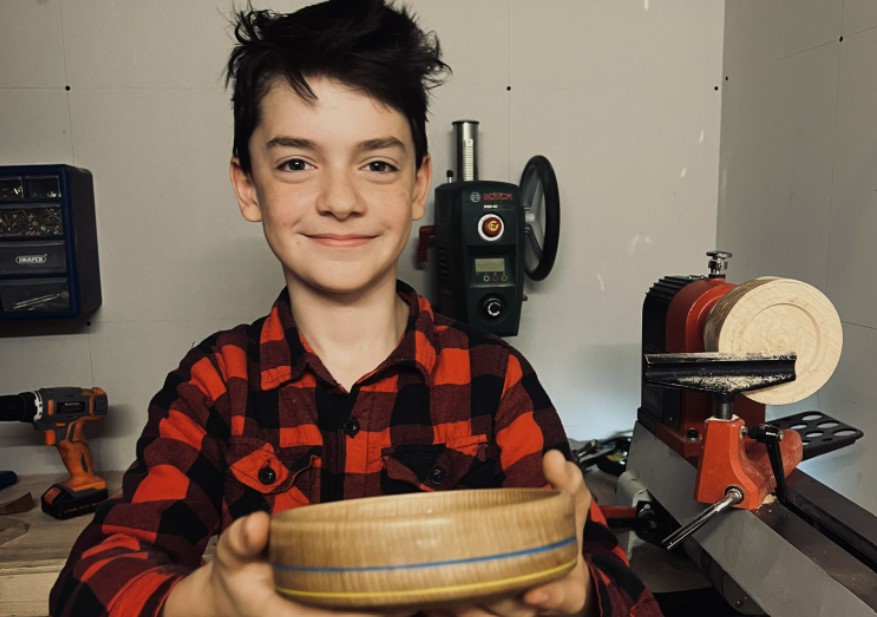 When a young boy from Cumbria, UK, set up his Instagram account, he had no idea how it would impact his fundraising efforts for Ukraine, surpassing his £5,000 target by thousands of pounds.

Gabriel Clarke, 12, fell in love with woodworking when he was just three or four when his mother gifted him his grandfather’s hammer, now, he has raised over £243,000 for Ukraine and has over 250,000 followers on Instagram supporting him.

On March 25, Gabriel’s father, Richard Clark, tweeted about his son’s woodwork and how he’d been saving money from sales of his handcrafted wooden bowls and cutting boards for a mountain bike. The post went viral, with Gabriels’ Instagram raking in thousands of orders for custom bowls – going from 6 followers to over 200,000 in 48 hours.

Lovely twitter people – I don't know how many of you are also #instagram users but I'm looking for a wee favour. I've a 12yr old who loves woodwork. He spends hours on his lathe making bowls and creating chopping boards which he's sells to save up for a mountain bike. 1/3 pic.twitter.com/Ny60rFf1TE

Gabriel’s Just Giving page reads: “So as many of you might already know, following a tweet from his Dad to try and rustle up a few more followers for Gabriel’s Woodwork Instagram page, his account went from 6 followers to 227,000 within 48hrs. He was overwhelmed by the offers of support and encouragement that flooded in and we estimate that he now has 20,000 commissions for bowls!”

“Unfortunately he still has school, homework and his workshop to tidy so instead of carving 20,000 bowls, which we estimate will take 32yrs, he has carved one – Gabriel’s Bowl For Ukraine – which will go to a randomly selected donor at Easter.”

“To enter the draw all you have to do is donate some money to the SAVE THE CHILDREN Ukrainian appeal. We are all aware of the terrible suffering that the country is currently facing and Gabriel hopes that this is a way he can pass on some of the generosity that people have shown him, to children in much greater need.”

“So give what you can. I’m afraid the more you give doesn’t increase your chances of winning the bowl but it couldn’t be for a better cause.”

“And again a huge thank you from Gabriel. He says it’s his best bowl yet! Good luck.”

The winner of the bowl has now been chosen, however, you can still donate on Gabriel’s Just Giving page until next weekend, April 24.

Originally from UK, Laura is based in Axarquia and is a writer for the Euro Weekly News covering news and features. Got a news story you want to share? Then get in touch at [email protected]roweeklynews.com.