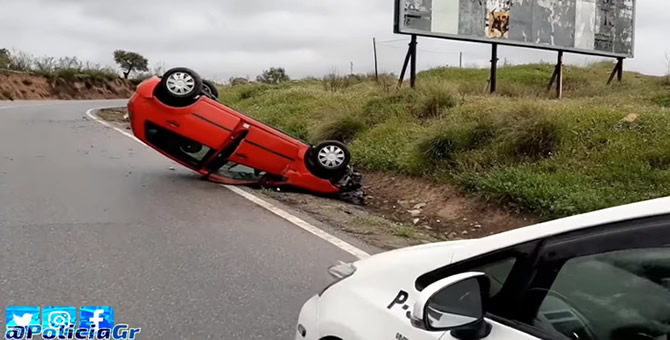 Two people escaped unharmed after the car in which they were traveling overturned this Wednesday, April 20, near the Granada municipality of Viznar . It is believed the accident was probably due to the heavy rain that had accumulated on the surface of the road at the time.

As can be seen in the video below, a patrol from the Local Police arrived on the scene to find the vehicle rolled over onto its roof. Fortunately, the two occupants – a man and a child – were not injured, and did not require medical attention.

Once the Guardia Civil was present – as they have jurisdiction in such incidents – it was possible to proceed with the removal of the car.

The incident occurred at around 6.30pm last Wednesday 20. A call was placed to the police emergency number, alerting them to the accident, and a patrol unit was subsequently deployed to the location near Viznar.

According to what police sources told granadadigital.es, although this area was out of their territory, they proceeded to the scene in case there was a need to assist the occupants.

A spokesperson for the police stressed that presumably, the driver had not been paying attention to his speed under the wet conditions, to cause his car to leave the road in the manner that it did, and finishing up on its roof.

The vehicle was eventually removed by the roadside assistance vehicle of the driver’s insurance company, allowing the road to be opened once again to traffic by around 8pm, as reported by granadadigital.es .