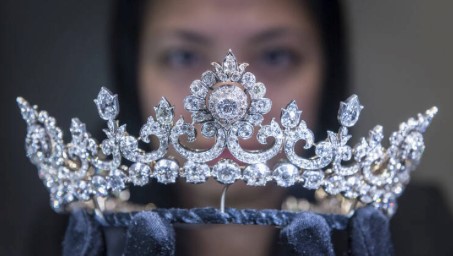 An exquisite diamond tiara worn at two royal coronations will be showcased at Hancocks London. Image: Imago Images for Hancocks

In May and June, the jewellers Hancocks London will be displaying a stunning diamond tiara that was worn to two royal coronations.

A beautiful diamond tiara worn at not one but two royal coronations will be showcased and put up for sale at Hancocks London, a long-standing high-end jewellery shop, in May and June ahead of the Platinum Jubilee celebrations.

According to Hancocks, the diamond-encrusted tiara was made around 1980, is set with more than 100 carats of old-cut diamonds and belonged to one of the wealthiest families in Britain.

In a statement, Hancocks explained the history behind the tiara:

“The tiara was inherited by Henry Cyril Paget, the fifth Marquess of Anglesey, after the death of his father. Henry, the great-grandson of the Earl of Uxbridge, the hero of Waterloo renowned for his stoic reaction to losing his leg, succeeded to the title and Plas Newydd house in Anglesey, Wales, in 1898, when he was just 23 years old. As well as the title, the fourth marquess also left his son a family estate and immense wealth. Six years later, the fifth marquess had blown the lot, having spent his fortune on outrageous clothes, furs, jewels, and dramatic productions. He was declared bankrupt with debts of £560,000 – equivalent to a value of approximately £60 million today.

“Trustees were appointed to run his estates – and then began 40 days of auctions selling off all the items collected over the previous five years.

“The tiara escaped the sale to repay creditors and was inherited by his cousin and heir, Charles Paget, who became the sixth Marquess of Angelsey. After a distinguished military career, Charles served as Lord Chamberlain to Queen Mary and the Pagets maintained close ties to the Royal family over the coming decades, hence their attendance at both coronations.”

“What’s interesting is that this tiara was one of the very few possessions not sold off to pay debts following the death of the fifth Marquess. Instead, it was retained by the sixth Marquess and Marchioness of Anglesey and clearly held a special place in the family’s heart.

“As tiaras go, this one truly is magnificent and has to be one of if not the best in class we’ve ever seen and we’re delighted to offer it for sale. It really is a jewel with amazing provenance given its rich history along with the fact that it was worn for not one but two royal coronations.”