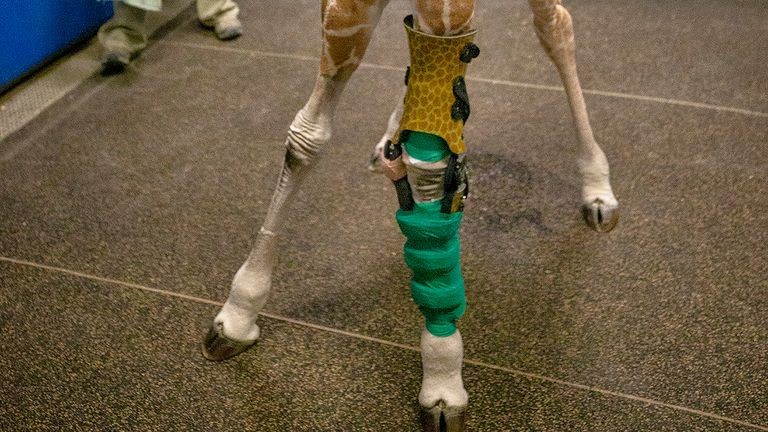 An adorable baby giraffe born in California, was unable to walk because of her front limbs bending the wrong way, but zookeepers who were concerned she could die, enlisted the help of a local orthotic expert who made her a pair of leg braces.

Zookeepers at the San Diego Zoo Safari Park were worried that the 1.78 m three-month-old giraffe would die is she did not get help, knowing full well that in the wild she would’ve fallen prey to a predator almost immediately.

But as this is California, help is never far away. Staff at the zoo reached out to the Hangar Clinic where orthotic specialist Ara Mirzaian works. He is well known for his work with Paralympians and with children who have scoliosis.

He told AP news that the case was “surreal”, diagnosing her with hyperextended carpi, wrist joint bones in the front limbs of a giraffe, which act more like arms.

Mirzaian, went to work straight away, taking mouldings of the giraffe’s legs and sending these away to get braces made for her.

While they were being made, vets at the zoo used post-surgery braces but as they kept slipping off, they modified human ones as an interim solution.

Eight days later, the braces arrives, coloured in the animal’s distinctive hide pattern, prompting Mirzaian to hug the animal. She was then put under, and they set about fitting one of the braces, with the other leg having rectified itself.

He said: “It was the coolest thing to see an animal like that walk in a brace. It feels good to know we saved a giraffe’s life.”

“It was just amazing, seeing such a big, beautiful creature just lying there in front of me.”

Msituni worked with a company that makes horse braces, as these would not only need to be durable, but also have the range of motion that the animal would need. The horse company had that knowledge and skill.

According to zoo staff it took just ten days for the braces to work and 39 days later they were removed.

Collaboration between vets and human medical professions is becoming more common, with collaborations such as this one helping to advance technology in the field of prosthetics and orthotics.

Now the adorable giraffe Msituni, who needed braces as her limbs were bending the wrong way, is able to run free.