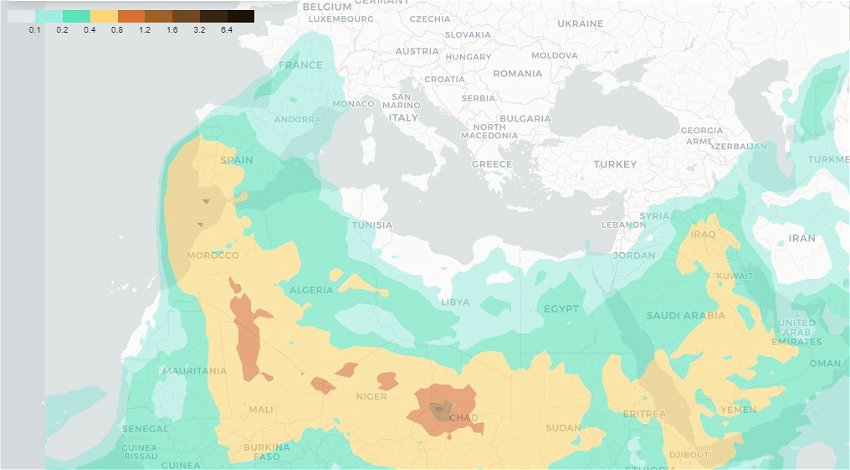 According to the State Meteorological Agency of Spain (AEMET), a large part of the Peninsula will see Saharan dust arriving on Friday, May, 20.

AEMET took to twitter to issue a warning of the Saharan Desert dust expected to hit the Spain tomorrow stating:

“During this week, the Peninsula and the Balearic Islands are experiencing the progressive entry of a very warm and dry air mass of African origin, due to the formation of a low to the west of the Peninsula.”

“The presence of this warm mass, together with the conditions of atmospheric stability and strong sunshine, will cause a progressive and marked rise in temperatures, reaching values typical of summer and exceptionally high for this time of year.”

“This episode is expected to be fairly widespread, with the exception of northern Galicia and the western Cantabrian Sea, due to the cool northerly flow, and the Canary Islands due to the persistence of the trade winds. ”

“The southerly flow will also carry suspended dust, which will cause haze mainly during the weekend over the Peninsula and the Balearic Islands.”

AEMET’s full weather forecast for Spain on Friday, May, 20 stated:

“Cloudy tending to cloudy intervals in the Cantabrian area. In the rest of the Peninsula it will be partly cloudy with intervals of medium and high clouds, but with some cloudiness of diurnal evolution in central and northern areas, without ruling out some isolated showers in the area of the western Cantabrian mountain range.”

“The Balearic archipelago will be predominantly cloudy, while in the Canary Islands, cloudy intervals are expected in the north of the islands, with the probability of some light rainfall in the islands of greater relief, and little cloudy in the south.”

“Possibility of morning fog in the interior of Galicia and the western Cantabrian area. Calimas (Saharan desert dust) likely over a large part of the Peninsula.”

“Temperatures rising in the western half of the peninsula and the Ampurdán, slightly falling or unchanged in the Balearic Islands, Canary Islands, south of the Valencian Community and mid-Ebro. ”

“Slight increase in the rest. Temperatures are expected to be well above normal values for the season in the Peninsula and the Balearic Islands, exceeding 36/38 degrees in the Guadiana and Tagus valleys, and 38/40 degrees in the Guadalquivir valley.”

“Rising minimum temperatures in the western half of the Iberian Peninsula.”

“Winds from the east and southeast in the eastern half of the Iberian Peninsula and the Balearic Islands, with strong easterly winds in the Strait of Gibraltar and the eastern coast of Andalusia. North-easterly on the coast of Galicia and the Canary Islands. Variable light winds in the rest of the area.”