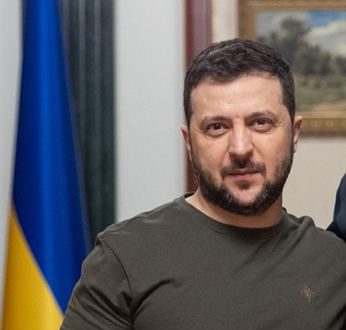 President Zelensky said that with over 2,478 missiles fired, 12 million Ukrainians displaced, and the death of over 30,000 soldiers, Russia currently occupies 20 per cent of Ukraine.

Ukraine’s President Zelensky shared the news of the current scale of Russia’s invasion on Thursday, June, 2.

“Russian troops have entered 3,620 settlements in Ukraine. 1,017 of them have already been displaced. Another 2,603 must be withdrawn. Approximately 20 per cent of our territory is now under the control of the occupying forces,” stated Ukraine’s President Volodymyr Zelensky in a video address to Luxembourg’s parliament, as reported by Kyiv Independent.

“Almost 12 million Ukrainians have been internally displaced. About 5 million, including women and children, have moved abroad.”

President Zelensky also spoke on the where the fighting against Russia is currently taking place:

“Fighting is taking place across a vast area from the city of Kharkiv on the outskirts of our country to the city of Mykolayiv on the east. In a straight line between them is 454 kilometres. But if you look at the entire front line – and it is not straight, of course – this line is over one thousand kilometers.”

“Today Ukraine suffers from Russian missile attacks. In the last day alone, Russia deployed 15 different crude missiles. During the entire period since 24 February, 2,478 missiles were fired. Most of them were directed at civilian infrastructure,” said Zelensky.

“The occupiers have already lost over 30,000 soldiers. That is more than the Soviet Union lost in 10 years of war in Afghanistan. More than Russia lost in two Chechen wars. But this does not stop Russia. This country is ready to continue losing and killing people.”

Zelensky pointed out that Russian President Putin is to blame for the war stating: “There is only one person in Russia who wants to stop us from being the way we are.”

“Ukraine has shown extraordinary courage. We have not surrendered to Russia. We have disrupted and are steadily dragging out of our territory the pro-Harbinger army, which has recently been considered the second strongest force in the world.”

“No one expected the Ukrainians to be on such a scale. But this power is there. And this strength of our character – our readiness to fight for freedom and for our values (and these are the common values of all free Europeans) is based today on the support we have received from our partners.”