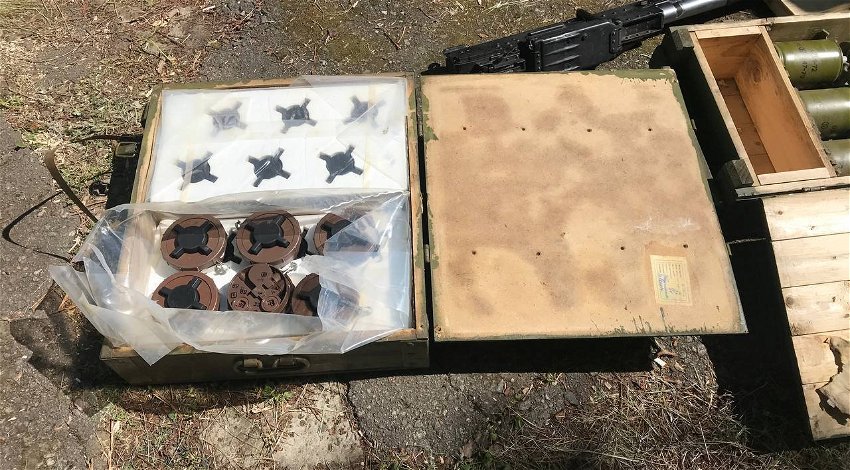 Ukraine mocks Russia for using 'ammunition made in the 50s' during Kherson battle. Image: @GuinieZoo_Intel/ Twitter

AS Russia faces resistance in recent battles in the Kherson direction, Ukraine has mocked Putin’s army for using ‘ammunition made in the 50s’ as Soviet mines were spotted in a military convoy.

Ukraine’s Ministry of Defence has openly mocked Russia’s forces as they were spotted with ‘ammunition made in the 50s’ after arriving in the occupied Kherson region. Putin’s army was recently caught using 50-year-old T-62 tanks in Melitopol.

“As a result of a successful counterattack by the defenders of Ukraine in the Kherson direction, the occupiers lost part of the temporarily occupied territories and suffered losses in manpower and equipment,” the MoD said on Thursday, June 9.

“A convoy of Russian military trucks with Soviet mines, manufactured in the 1950s, recently arrived in the occupied Kherson region.

“The ammunition was stored in warehouses in the Rostov region and was prepared for destruction. After appropriating the funds for disposal, the Russian command transferred the dangerous cargo to the advanced units of the invaders to mine the defensive positions,” it said.

It added: “When trying to set up mine barriers, several sappers-occupiers from the battalion tactical group 7 of the military base of the 49th General Army of the Southern Military District (unit 09332) of the Russian occupation troops had already exploded on old ammunition.

“With military police and FSB officers working at the blast sites, the BTG command agreed that this would be classified as an accident. Families of sappers will not receive payments for the death of relatives of the occupiers.”

This is not the first time Russian troops have been caught with Soviet-era military equipment.

On Thursday, May, 26, Russia deployed 50-year-old T-62 tanks as reported by the General Staff of Ukraine at the time.

“The Russian enemy group was additionally reinforced by a formed tank battalion on T-62 tanks in the Zaporizhzhia direction,” reported the General Staff of Ukraine.

Interestingly, prior to that, a Ukrainian ammunition stash was found in the basement of a school in the Kherson region, on April 19.

A Ukrainian ammunition stash was found in the basement of yet another school in the Kherson region. Many schools – especially those built during the Soviet era – are equipped with bomb shelters, making them popular hiding spots for the AFU units. April 19 pic.twitter.com/J43pimIDKH