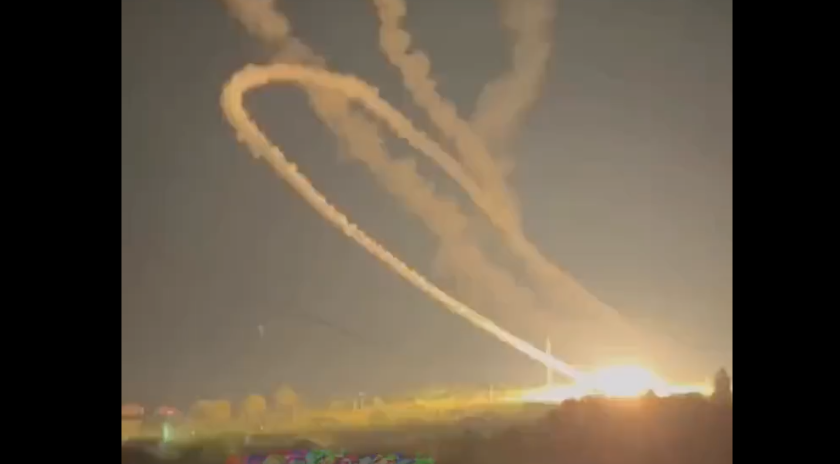 VIDEOS circulating on social media have apparently captured the moment an air defence system from the Luhansk People’s Republic (LNR) – a breakaway state located in Ukraine formed by pro-Russian separatists – shot itself.

Unverified footage doing the rounds on social media platforms on Friday, June 24 reportedly shows the moment an LNR air defence system reportedly fired back at itself following a malfunction.

The incident happened in occupied Alchevsk in the early hours of Friday, June 24, when Russian troops launched a missile into the air to intercept an approving Ukrainian plane, however, seconds later the missile ‘returned to sender’.

The videos show a huge explosion and bright flashes shoot down from the crash site.

According to local media reports, a fire erupted from the site not far from residential buildings.

One person on Twitter offered an alternative opinion, suggesting that it could have been Russia’s own anti-air defence systems that interfered.

Putin fascist regime's failure to launch: In occupied Luhansk, the missile hit a field shortly after launch.
Two theories being entertained: Russia's own anti-air interfered or the missile itself malfunctioned. pic.twitter.com/1HEYoQorHC

The LNR has been heavily involved in the war in Ukraine, however recently, a captured soldier from the Luhansk People’s Republic militia claimed that Russian forces had suffered great losses since Russia’s invasion began on February 24.

The soldier, a native from the Luhansk region of Ukraine who claimed to be mobilised for the Luhansk People’s Republic, reportedly stated: “We passed Lenin Street (now Volodymyrska Street – note) for a total of 3, maybe 4 weeks.”

“We passed through with such battles and losses that ‘during this time there was great destruction, great losses from the company, 70 per cent”.