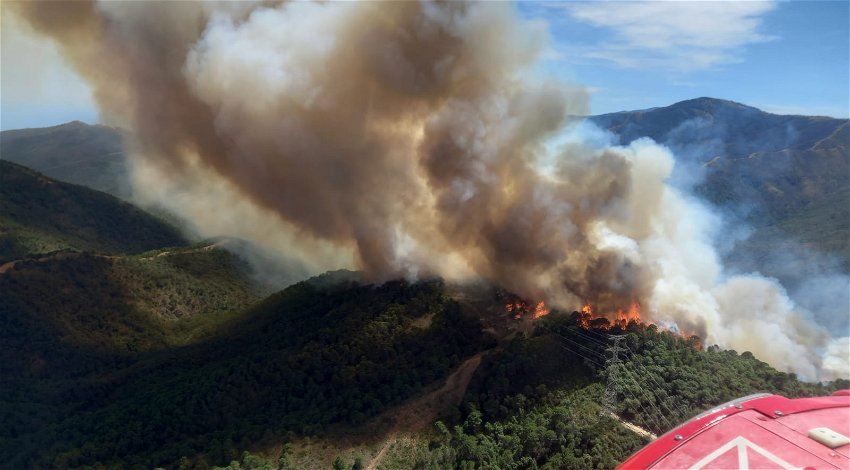 The fire that burned in the Malaga region of Pujerra for more than two weeks has finally been declared extinguished by Plan Infoca.

Plan Infoca has announced via its Twitter profile this evening, Sunday, June 26, that the fire in the Malaga region of Pujerra has finally been declared extinguished at 8pm. The blaze had started on Wednesday, June 8, affecting the municipalities of Benahavís, Estepona, Farajan, Igualeja, Jubrique, Juzcar, and Pujerra.

The blaze broke out on La Resinera farm, where, because of its origin, four people who had been working that day with machinery, without the pertinent permits, were detained and gave statements to the Guardia Civil.

Adverse weather conditions in the first hours of the fire resulted in the preventive eviction of nearly 2,000 residents from Benahavis, the Velerin Alto area, Montemayor, Marbella Club, and Benahavis Hills urbanisations.

Extinguishing the fire had been a complicated task due to the orography. It broke out on rough terrain with fairly dense trees and was fed by high winds and temperatures as it continued burning. Three firefighters were hospitalised with varying degrees of burns while tackling the incident. All have recovered and since been discharged.

A provisional damage report published by the Ministry of Agriculture, Livestock, Fisheries and Sustainable Development in the middle of last week, estimated that the total area affected would be around 4,860 hectares, as reported by laopiniondemalaga.es.

This included around 2,743 hectares of trees, 1,810 of scrubland, as well as some pastures, agricultural areas, and land dedicated to other uses.

More than 3,300 professionals from the Infoca Plan participated in the course of the fire’s extinction. On the ground, a total of 142 land vehicles were mobilised, while a total of 234 aerial missions were carried out, deploying up to 22 aerial means each day.

Another 233 troops from the Military Emergency Unit (UME) joined this operation, deploying 23 light vehicles and 58 other vehicles.