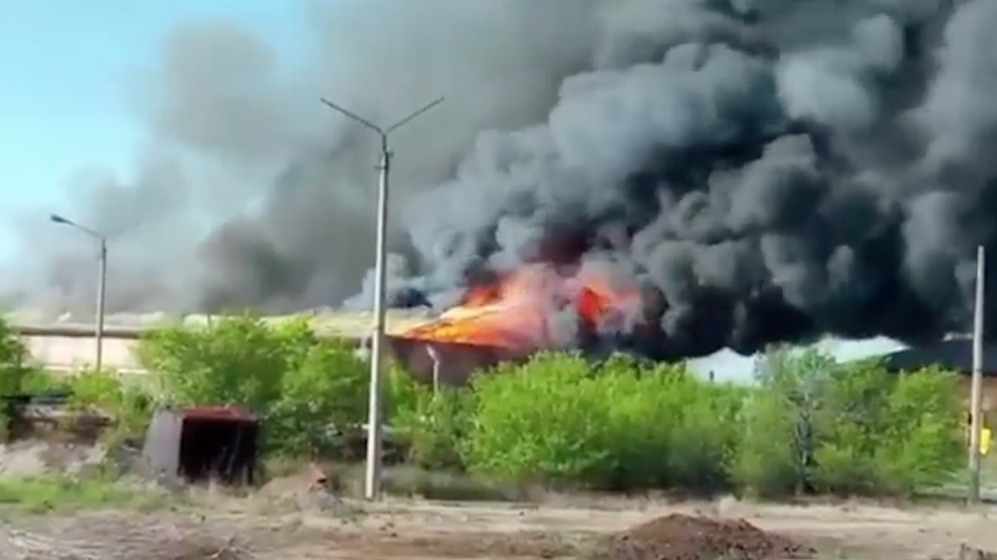 VIDEOS emerged of another huge fire that broke out in Russia, this time at some warehouses in Tuva’s capital city of Kyzyl.

The huge blaze in Kyzyl, the capital city of the Republic of Tuva, Russia, broke out in warehouses in the “Right Bank” district at around 3 am on Monday, July 3.

According to the Ministry of Emergency Situations, it took over 20 firefighters to tackle the flames.

⚡️ The Russian media report a fire in Tuva. Warehouses are burning on an area of almost 3,000 square meters. pic.twitter.com/f3q5bmoL4S

“All the forces of the fire and rescue units for the protection of the city of Kyzyl were involved in extinguishing the fire.

“In total, 25 personnel and nine pieces of equipment were involved in extinguishing the fire on an area of ​​2.8 thousand square metres.

“According to preliminary data, there were no victims,” ​​a statement read.

Tuva was annexed by the Soviet Union in 1944, with the approval of Tuva’s Little Khural (parliament) but without a referendum on the issue. It became the Tuvan Autonomous Oblast within the Russian Soviet Federative Socialist Republic after the Soviet victory in World War II.

The Tuvan republic lies at the geographical centre of Asia, in southern Siberia. The republic borders the Altai Republic, the Republic of Khakassia, Krasnoyarsk Krai, Irkutsk Oblast, and the Republic of Buryatia in Russia and Mongolia to the south.

The fire in Tuva’s capital city comes after a week after another suspicious fire broke out in Russia.

On June 29, a tyre factory in Russia’s Moscow burned as the result of an arson attack, according to Russia’s Ministry of Emergencies.

A fire covered a 1,000 square metre surface area, spreading to the second hangar of tyres.