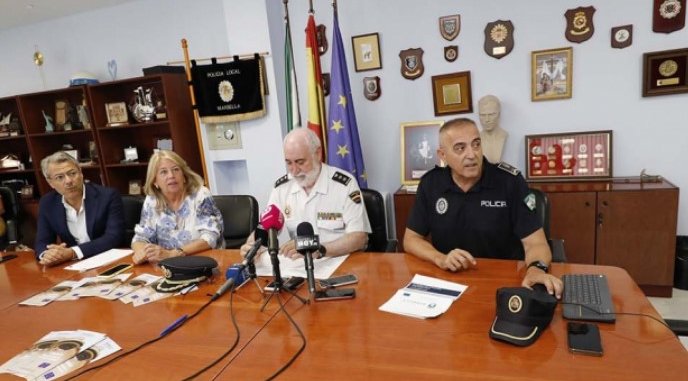 Image from the presentation of the second phase of Marbella's video surveillance system. Credit: [email protected]_Marbella

The Malaga city of Marbella has completed the installation of the second phase of its video surveillance system.

As announced on Monday, July 4, by Marbella City Council, the second phase of the installation of surveillance cameras in the Malaga city has been completed. New devices have been installed in 33 locations around the municipality.

They have been placed in areas deemed to have the highest influx of population and visitors. This action will reinforce security and enable security services to react faster in emergencies or traffic incidents that may occur.

Angeles Muñoz, the mayor of @Ayto_Marbella, attended the presentation, accompanied by Jose Eduardo Diaz, the Councillor for Citizen Security. They were joined by Javier Martin, the head of the Local Police, and Enrique Lamelas, the commissioner of the National Police.

It was pointed out that this video and sensor subsystem responds to two objectives: to provide greater security to those areas with a greater concentration of people for leisure and business activities, and to identify vehicles and individuals involved in incidents.

There are 48 cameras installed in this second phase, Mr Diaz indicated, of which 9 are catalogued as the Network of License Plate Readers (RML) “for traffic flow control, that will allow officers to have information to act in situations of crisis or emergencies”, he underlined.

He added that this project “will improve the feeling of citizen and road safety, minimising the number of incidents, traffic jams, and crimes against collective security”. Diaz highlighted the technology used to implement this system, with a 12.5km fiber optic deployment “with state-of-the-art cameras that make us a benchmark in advancement and investment in security, which reaches almost €5 million”.

These latest devices are added to the 85 of the first phase, which will be complemented by those planned for the third and fourth phases in the municipality of San Pedro de Alcantara. On this occasion, Ms Muñoz explained, the network of cameras and sensors has been spread throughout the Old Town and the most central areas of the city.

They are in video-monitored areas, always guaranteeing the privacy of people since the images captured are only of public roads.

The locations in which the network has been deployed are the Plazas of Los Naranjos, de las Ranas, Monsignor Rodrigo Bocanegra, Caridad, Africa, Manuel Cantos and Jose Palomo. Others are in Avenidas Ricardo Soriano, Severo Ochoa, Miguel Cano and Ramon y Cajal.

More have been installed in the entrance arch to Marbella, along with Calles Trinidad, Ortiz Molinillo, Virgen de los Dolores, Ancha, Caballeros, Pedraza, Alameda, Huerta Chica, Peral, Alameda Sur and Norte, as well as in the Puerto Deportivo car parks.

Javier Martin from the Local Police stated that this system is positioned as an essential tool “for the effective action of officers in incidents, thanks to the fact that the images reach us in real-time, so we can reduce costs and time when acting in any emergency situation”.

This affirmation was also shared by commissioner Lamelas, who highlighted that video surveillance “is an important dissuasive element for criminal acts and also for prevention”.