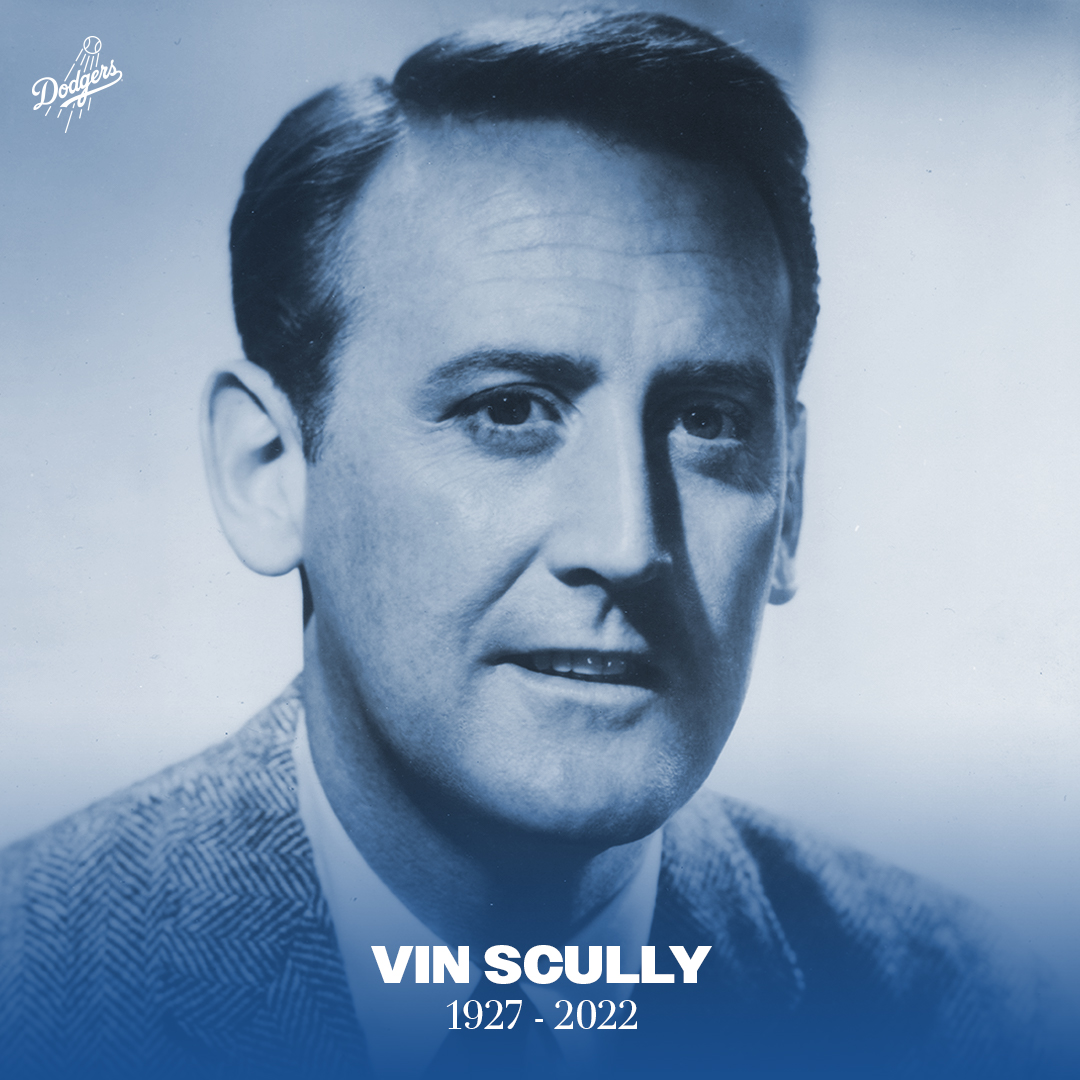 The death of American baseball broadcaster Vin Scully was announced by the Los Angeles Dodgers baseball team who tweeted:

“He was the voice of the Dodgers, and so much more. He was their conscience, their poet laureate, capturing their beauty and chronicling their glory from Jackie Robinson to Sandy Koufax, Kirk Gibson to Clayton Kershaw.”

“We have lost an icon,” said Dodger President & CEO Stan Kasten. “The Dodgers’ Vin Scully was one of the greatest voices in all of sports. He was a giant of a man, not only as a broadcaster, but as a humanitarian. He loved people. He loved life. He loved baseball and the Dodgers. And he loved his family.”

“His voice will always be heard and etched in all of our minds forever. I know he was looking forward to joining the love of his life, Sandi.”

“Our thoughts and prayers go out to his family during this very difficult time. Vin will be truly missed”

Vin Scully A real professional that all of us announcers inspired to be like #RIPVinScully https://t.co/8qkOcesUOa

Born on November 29, 1927 in The Bronx, New York, Vin Scully, full name Vincent Edward Scully, was best known for his broadcasting work in the 67 seasons he spent commentating on Major League Baseball games for the Los Angeles Dodgers.

Following the announcement hundreds of tributes have flooded Twitter:

When I was younger the Atlanta Braves where my favorite baseball team! I remember watching this game when Hank Aaron hit # 715 ! He is one of my heroes! Vin Scully was there and called that game! 🥂🤙🏽🫡🪖RIP Sir! Vin Scully Navy Veteran⚓️🇺🇸🦅 https://t.co/cSdYBpw4H7

I talk a lot of shit about the Dodgers but I’m genuinely heartbroken to learn of Vin Scully’s passing. His love for the game was palpable, and he truly saw it all. Maybe the greatest there ever was.

Vin Scully was an absolute artist with his words, and he loved broadcasting as much as he loved the game. I was lucky to hear him growing up in Southern California and he'll be missed by so many. Legend

You don't have to be a Dodgers fan to know that Vin Scully was the man. Rest in peace.

The only time a Dodger has ever been chosen on the wrap.

It’s with the heaviest of hearts that I say goodbye to a true hero of mine, Mr. Vin Scully. Thank you for helping a young man fall in love with the game of baseball, and providing me with the inspiration to pursue a career in sports broadcasting. Rest In Peace🙏💙🐐#RIPVinScully pic.twitter.com/ftLVZgbpU8

Vin Scully composing poetry, on the spot, off the top of his head, live, and without revision.

Love this pic with Vin Scully and RJ and some buddies…

What a huge loss. 💙🙏🏾⚾️ pic.twitter.com/unbZdKSAnp

Arguably the greatest sports commentator of all time. His gentle stories of his past with baseball were more ASMR-like than hearing childhood stories from Joe Biden. Kind of awesome that #VinScully told that story exactly 80 years later on the clock. https://t.co/JOusRFjmYY

The news of the death of Vin Scully follows that of Darío Gómez, a popular Colombian singer aged 71 on Tuesday, July 26.