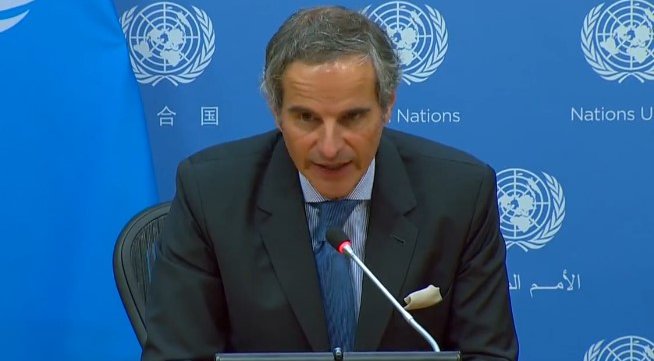 Rafael Grossi, head of the International Atomic Energy Agency (IAEA), has warned that a potential disaster is looming at the Zaporizhzhia nuclear facility in Ukraine.

According to Rafael Grossi, the director general of the International Atomic Energy Agency (IAEA), there is a possible nuclear disaster looming in Ukraine. He claimed on Thursday, August 4, that the Zaporizhzhia plant, located in the city of Enerhodar ‘is completely out of control’.

The nuclear facility is the largest in Europe and has been under the control of Russian military forces since they seized it in March. Grossi insisted that experts must be allowed to visit the plant urgently, to stabilise it and divert a potential disaster.

‘Every principle of nuclear safety has been violated there. What is at stake is extremely grave and dangerous, and getting more perilous every day’, stressed the UN’s nuclear chief and Argentinian diplomat.

#Breaking 🚨NuclearChief @rafaelmgrossi to @CBSNews what an inspection visit needs #ALERT: "If an accident occurs at #Zaporizhzhia NuclearPowerPlant, we will not have a natural disaster to blame — we will have only ourselves to answer to"https://t.co/Ua6lzRvcnL pic.twitter.com/hBQJxRTCBJ

Grossi also alleged that friction between the Ukrainian workers and their Russian guards has led to violence. Even though Russia controls the facility, its Ukrainian staff have continued with the daily operating procedures. At the time of Zaporizhzhia’s capture, there had been concerns over a repeat of what happened in Chernobyl back in 1986.

The IAEA chief, speaking from the United Nations in New York, insisted that his team: ‘need to perform very important inspections to ensure that nuclear material is being safeguarded. I’m pleading to both sides to let this mission proceed’. Grossi explained that the facility’s supply chain had been interrupted by the seizure.

Last Monday, August 1, Antony Blinken, the US Secretary of State accused the Russian of using Zaporizhzhia as a ‘nuclear shield’ to enable them to attack Ukrainian forces without retaliation. He described their actions as ‘the height of irresponsibility’.

Moscow has continued bombarding the area near the nuclear plant. At least 60 missiles were reported to have been fired at the city of Nikopol which is just across the Dnieper river from Zaporizhzhia. According to Ukrainian authorities, powerful explosions damaged around 50 buildings. The attack brought down power lines, leaving homes without electricity, as reported by metro.co.uk.