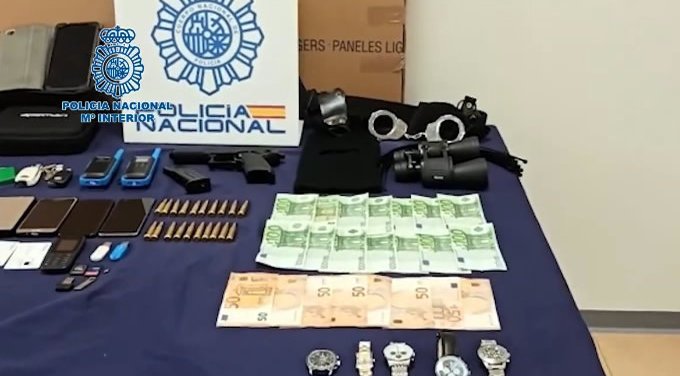 A gang of four Ukrainian criminals specialising in extorting compatriots has been jailed after Spanish police arrests in Malaga and Madrid.

As reported by the National Police in a statement today, Saturday, August 6, four individuals have been arrested and imprisoned. They were allegedly a criminal group of Ukrainian origin that was dedicated to extorting compatriots.

A man who had settled in the province of Malaga was identified as the leader. He directed, organised and coordinated the rest of the members who resided in Madrid, according to laopiniondemalaga.es.

Those arrested used excessive violence to commit robberies with violence, extortion and illegal arrests, in addition to planning and executing drug ‘overturns’.

The investigation began after a robbery committed last May in the Alicante town of Benidorm. The police learned of the violent assault on a house where three women of Ukrainian nationality lived who had recently settled in Spain as a result of the war in their country.

After gaining access to the home, the victims were handcuffed with cable ties and gagged with duct tape. They began to search the house, looking for money and effects of interest, at which time one of the victims managed to escape. She got out into the street to ask for help, jumping on a passing vehicle. At this point, the gang quickly left the scene.

Investigations quickly led to the identification of their vehicle and, together with the statements of victims and witnesses, it was possible to determine that the origin of the criminals was also Ukrainian.

Progress was made when officers verified that one of the alleged perpetrators could know one of the victims. They therefore could know that they had a significant amount of cash that had been taken out of Ukraine to buy a house in Spain.

Subsequent steps allowed the police to fully identify all the assailants. From this moment on, a more exhaustive investigation of all of them began and it was soon detected that the leader of the group was moving, on several occasions, and in the same day, between Malaga, Alicante, and Madrid.

It was subsequently verified that those involved were part of a criminal network allegedly dedicated to extorting compatriots who handled amounts of cash, as well as planning and executing drug “‘dumps’.

Once all the relevant information had been compiled, officers established the corresponding operation that culminated in the arrest of four people – three in Madrid and one in Malaga. Searches of homes were conducted in three homes in Madrid, and two more in Malaga.

Items directly related to the robbery were seized in them, such as simulated firearms, balaclavas, bridles, shackles, ammunition, walkie-talkie transmission equipment, and more than €20,000 in cash.

Various foreign registration plates, and other effects from the perpetration of crimes related to the criminal organisation were also uncovered. A vehicle that had been reported stolen was also recovered.